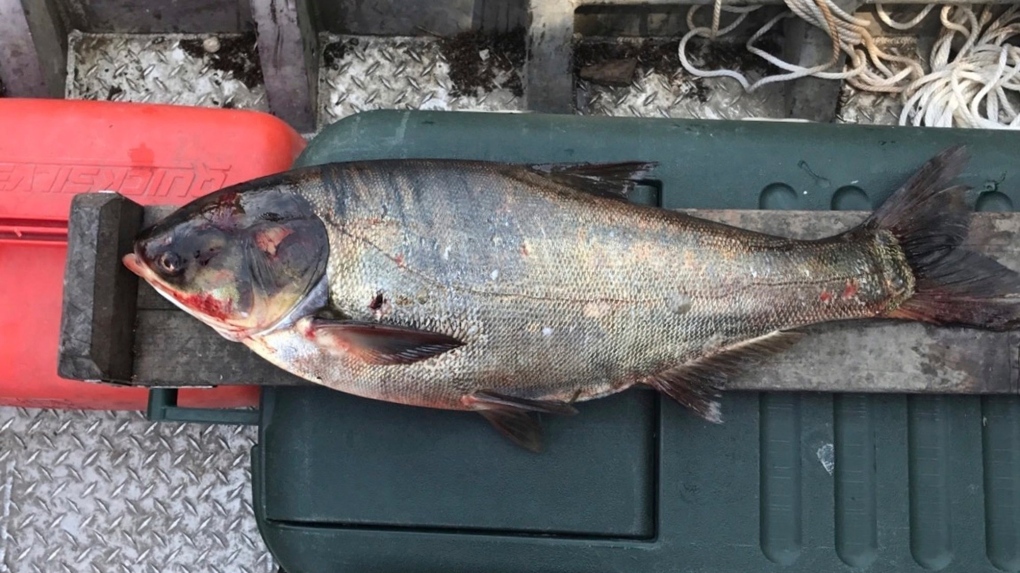 TRAVERSE CITY, Mich. -- An interstate partnership has been established to help cover costs of operating a system proposed for a Chicago-area waterway that would help keep invasive Asian carp out of the Great Lakes, Michigan Gov. Rick Snyder said Wednesday.

The initiative would support upgrades to the Brandon Road Lock and Dam near Joliet, Illinois, a key choke point between the carp-infested Mississippi River watershed and Lake Michigan. A $275 million draft plan released last year by the U.S. Army Corps of Engineers would attempt to block the carps' path toward the lake with a gauntlet of devices, including an electric barrier, noisemakers and water jets.

Four types of carp imported from Asia in the 1960s are threatening to attack the lakes, where scientists say they could out-compete native species and upend a $7 billion fishing industry. An adult silver carp, one of the Asian varieties, was found last June in Chicago's Little Calumet River just 9 miles from Lake Michigan, although most of the population is believed to be much farther downstream.

"To have these carp come into these lakes would be devastating," Snyder said in South Haven, where he announced the new Great Lakes Basin Partnership to Block Asian Carp. "There's been too much talk and not enough action."

The Army Corps is developing a final version of its Brandon Road plan under a timetable that envisions construction beginning in 2022, with completion three years later. Officials in some Great Lakes states, including Michigan, are pushing for faster action. But Illinois is resisting, fearing the project would disrupt freight shipping on the busy waterway.

Snyder said the multi-state coalition could remove one obstacle by providing funds required to supplement federal outlays. In particular, the Corps wants partners outside the federal government to pay about $8 million a year for operation and maintenance once the system is up and running. Coalition members would share those costs for five years while seeking other long-term sources.

Michigan, Ohio, Wisconsin and the Canadian province of Ontario have joined the partnership, he said. States in the region that have yet to sign on include Illinois, Indiana, Minnesota, New York and Pennsylvania, plus the province of Quebec. But those on board represent more than 90 per cent of the lakes' surface area.

The amount contributed by each state would depend on how much of the Great Lakes they contain. Michigan, with more than 40 per cent of the surface area, would pay the most, followed by Ontario, which has 36 per cent. Wisconsin has roughly 10 per cent and Ohio about 4 per cent.

The plan would require approval of legislatures and fine-tuning as development of the Brandon Road project continues. But advocates said the states' commitment highlights the urgency of the threat.

"We are in a race against the clock," said Molly Flanagan, vice-president for policy of the Alliance for the Great Lakes, noting that the silver carp found last summer had apparently gotten around electric barriers that presently form Lake Michigan's last line of defence.

Snyder said Michigan also has talked with the Metropolitan Water Reclamation District of Greater Chicago about helping with construction costs for the Brandon Road project. The Army Corps draft report said the federal government should pay 65 per cent of the $270 million, with a "non-federal partner" providing the rest.

David St. Pierre, executive director of the Chicago water district, said a recently enacted law could enable cities or states to help cover such costs with funds the federal government owes them for advance payment toward other public infrastructure upgrades.

But he said the district's board would have to approve any use of Chicago's funds for the Brandon Road project -- an unlikely prospect unless it's redesigned to satisfy Illinois' objections.

"With the current proposal, there's no way I would be willing to ask the board to support it," St. Pierre said. Still, he praised Snyder for creating the partnership to seek common ground.