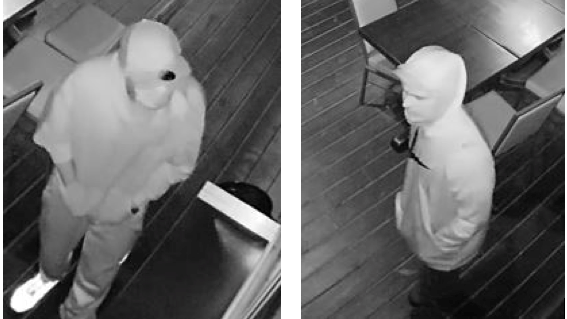 WINDSOR ONT. -- The Windsor Police Service – Amherstburg Detachment is seeking a suspect who allegedly broke into an Amherstburg restaurant through the window.

Police say on Tuesday, Sept. 15 patrol officers attended the restaurant in the 200 block of Dalhousie Street after staff discovered items missing from the business.

Police say it is believed the break in happened around 5 a.m.

Investigation found that entry had been gained by force through a window to the building, police say.

Officers spoke with witnesses and canvassed the area for surveillance footage obtaining a photo of the suspects. They determined two suspects were involved in the crime.

The first suspect is wearing a face mask, while the other is shown in the video footage.

Police are hoping a community member may be able to assist in identifying the suspects.

Police are asking anyone with information to contact Windsor Police Service-Amherstburg Detachment at 519-736-2252, Crime Stoppers anonymously at 519-258-8477 (TIPS) or online at www.catchcrooks.com.