'You can’t be pointing the finger': Windsor nurses feel ostracized for working in Detroit 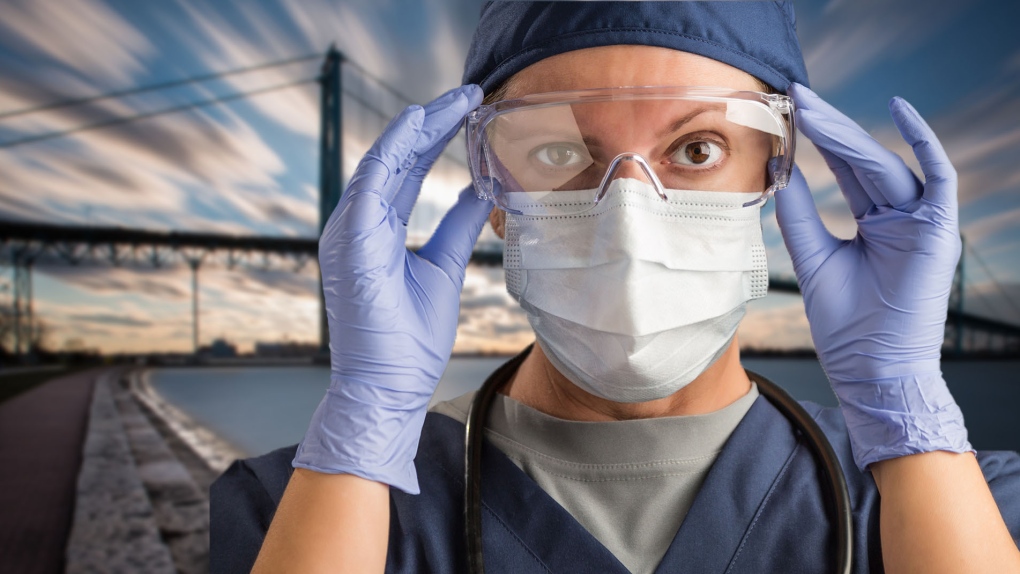 File photo of a nurse with the Ambassador Bridge in the background. (Courtesy Getty Images)

WINDSOR, ONT. -- Two nurses, who live in Windsor and work in a Michigan hospital, speak anonymously to help set the record straight for how seriously they are protecting themselves and their families.

Sophia* has been working in Detroit as a nurse for 30 years; Julie* for 20.

It’s a job they have loved, up until the last two weeks.

The women are speaking with CTV News on the promise of anonymity, for a variety of reasons.

First, their employer recently told staff members to stop putting their workplace environment on social media. Second, because they already feel “ostracized” in Windsor for doing what they do. Thirdly, because they both admit crossing the border has changed and they worry about how border agents on both sides are reacting to the pandemic.

Crossing the border was quieter than normal they say in early March, when some cross-border workers started trying to work from home.

Julie says border officers in the United States started asking a lot more questions and in the days after the restrictions, officers with Customs and Border Protection seemed “a little bit more concerned” than their Canadian counterparts.

Now both nurses say they are getting extra questions at the border, going both ways.

“Have you taken care of a COVID-19 patient today?” the CBSA’s officers now ask “Not that I’m aware of.” Is the only correct answer the nurses can give.

“We’ve been told to assume each patient has COVID-19,” Julie says.

This week, Sophia says one border officer in Windsor asked for her email address, home phone number and household address.

“If I had a choice, I would not be going there,” says Sophia.

“I wish they would just shut the border,” says Julie “Then I wouldn’t be forced to choose. You’re torn in a thousand different directions, for your family and the people that need you.”

Both nurses say they feel duty-bound to not “abandon” their sick patients.

“The hospitals would close in Detroit if Canadian nurses weren’t there,” according to Julie.

“If you don’t go to work, you’re a coward,” says Julie who then worries about the impact of one less staff member on the others.

Then there are their lives at home, which is where both women get visibly upset.

“There’s this pit in my stomach, that never goes away,” Sophia says.

As a single mom, she’s trying to keep her teenage kids busy and fed while at the same time, protecting them from exposure to the coronavirus.

“Have you ever gotten naked, every day, in your garage?” she asks.

Sophia tells CTV News she wipes down her vehicle with disinfecting wipes, goes from the garage to the shower, to the washing machine to clean all of her clothes, every day.

She doesn’t sit with her kids and makes her own meals.

Sophia admits her situation is “easier” than Julie, who has young children.

“My son said to me, Mom, I wish you could snuggle with me tonight, but I know you are a nurse, so you can’t.”

Julie is self-isolating in her own bedroom, with her own bathroom, barricaded with a baby gate to keep her children away.

“There’s this constant nervous energy I have,” Julie says “I want to do things but I can’t do a damn thing in my own home.”

In the last month, Julie says she only drives between work and home and never goes to any stores in the city.

Same thing for Sophia, who relies on grocery stores programs that bring groceries to her car, because she knows she must worry about being a carrier of CV19.

“But now that isn’t available until April 14,” Sophia says. “How am I supposed to get groceries?”

The nurses lament the online criticism they are getting, as Windsor’s positive patients counts surge. One-third of the local cases, are healthcare workers, like them, who work in the United States.

“I think in some cases we’re taking more precautions than they (Windsorites) are,” worries Sophia.

These nurses aren’t asking for gratitude or appreciation, just some respect from people who would like to blame the current cases on nurses bringing the virus back into the City.

The women point out, Windsorites have long enjoyed the benefit of having access to Detroit hospitals for critical life-saving measures, like cardiac care. But now the nurses feel like everyone has forgotten those benefits.

“You can’t be pointing the finger at people (who) are trying to solve the situation,” says Julie.