The wheels are in motion to convert the Old Sandwich Towne post office into cafe, bed and breakfast - all while keeping the historical charm of the building's former use.

The old post office will soon be turned into a very modern-looking tea and coffee shop, at least modern on the inside. The outside will keep its historical look.

Co-owner Matt Zhao has plan to make the historic building into a daily innovation meeting centre.

"We come to preserve the building, not to change anything," says Zhao.

The former neighbourhood anchor is hoped to soon return to its glory days as a community hub.

"I think this is quite an astounding thing," says architect Jason Grossi. "I see no reason why the old function can't suit the new function relatively well."

The post office was built in 1905. In 2013, the doors were shut for good despite a public outcry.

"The intent here is to try and save everything that we can that is left that is of heritage value."

The main floor will be renovated into a cafe specializing in tea.

Three bedrooms on the second floor will be home to a bed and breakfast, while the top floor will be converted back into a caretaker's apartment - just like it once was for the postmaster many years ago.

Zhao, from Toronto, says the idea is to make this an innovation centre, where students and neighbours can meet and socialize.

He says when he first arrived in Canada from China 10 years ago, finding a comfortable meeting place wasn't easy.

Kevin Alexander, with the city's planning department, says a historical building incentive is being utilized to help with renovations.

While city permits still need approval, Alexander says this project is a step in the right direction for the sandwich town revitalization.

"It appears to be something that would fit into this area," says Alexander.

Once permits are given the green light, the million-dollar project may take up to a year to complete.

"I think the renovation will take us six months to a year, but like Jason says, somethings have a right way and a wrong way - we pick the right way to do the job," says Zhao. 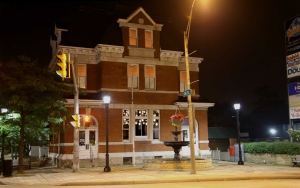 Inside look at transformation of old Sandwich Street post office