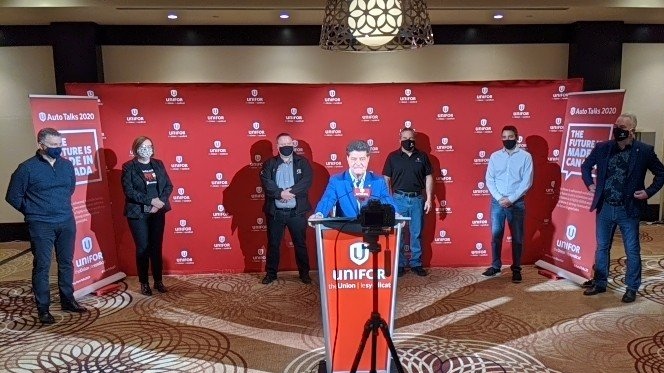 WINDSOR, ONT -- Fiat Chrysler Automobiles and the union representing it’s workers in Canada have reached a tentative deal that includes a major investment in the Windsor Assembly Plant.

Unifor president Jerry Dias says between $1.35 and $1.5 billion will go into Windsor Assembly Plant that will stabilize the operation.

Dias announced that FCA has agreed to invest in a multi-energy vehicle platform at Windsor Assembly that will include the assembly of both plug-in hybrid and battery electric vehicles with at least one new model in 2025.

He expects jobs to rise by over 2,000 more than exists in the Windsor Assembly Plant today, including 425 jobs that are currently on layoff. The third shift at Windsor Assembly is forecast to return in 2024

Dias says it's the best economic agreement they've put together in 20 to 25 years.

"We wanted to find stability for our Brampton Assembly Plant, get our members are brought back at the Etobicoke Casting Plant, and deal with the loss of the 3rd shift in Windsor. With this deal I can proudly say that we accomplished each task," says Dias.

The deal came just as the company’s workers were set to go on strike at midnight Thursday.

Local 444 president Dave Cassidy says "it's a great deal" and he can't wait to bring it home to everybody on Sunday.

The union represents roughly 9,000 workers at six plants across the country, 4,500 of which are at the Windsor Assembly Plant.

Currently the plant in Windsor is nearing the end of a three-week shutdown with production expected to resume next week.

Unifor says there will be a $50-million investment in the Brampton Assembly Plant to extend the life of the Chrysler 300 as well introduce multiple derivatives of the best-selling Dodge Charger and Challenger. Etobicoke Casting will see more work in-sourced for the high volume Jeep Wrangler, 9-speed transmissions and potentially other products, leading to the recall of more than 100 members.

“This bargaining team worked very hard and I am grateful for the support and solidarity from members as we bargained during ever changing and difficult conditions during a pandemic. I urge members to support this settlement,” says James Stewart, Unifor’s FCA Master Bargaining Committee Chair.

More details of the tentative agreement will be presented to Unifor members during a series of virtual ratification meetings over the weekend and members will vote on whether to accept the agreement over a 24-hour period, starting at 10 a.m. on Sunday.

Bargaining is expected to begin with General Motors Canada later next week.