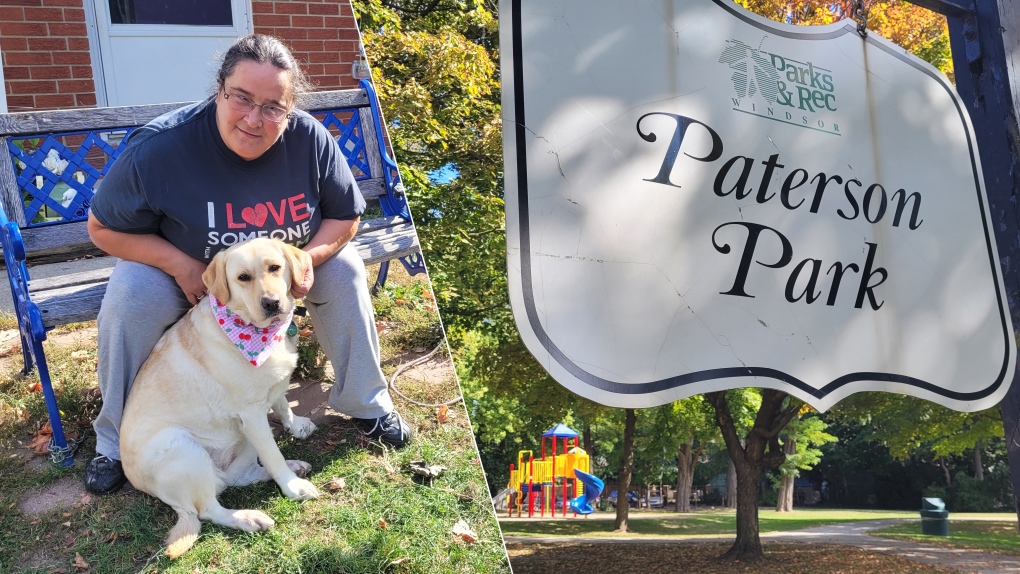 Margaret Cotter, pictured on Oct. 2, 2022, with her four-year-old dog Rosie, says the City of Windsor needs more dog parks. She raised the suggestion on social media after commenting on another resident's post which said dogs are being brought to Paterson Park without a leash and are scaring other pets in the neighbourhood. (Sanjay Maru/CTV News Windsor)

It's not a dog park — but an outdoor space in Windsor is being treated as such by dog owners, according to residents who live near the area.

The fence outside Leticia Nonya's backyard connects into Paterson Park in the city's Sandwich Town neighborhood.

She moved to the area two years ago and says, at least once a day, people have been walking their dogs throughout the park without a leash.

The result, according to Nonya, is dogs charging at neighbour's fences whenever they see another animal on the opposite side.

"For people that live in the area, their dogs get vicious and start attacking the fence as well," she said.

"I have a dog that is very anxiety-ridden now. She's terrified to go outside half the time because there are dogs charging at the fence."

According to Nonya, the daily confrontations led to a noise complaint which required a city worker to show up this past spring.

"I wouldn't care if they walked their dogs off leash if they had a recall for their dog," she said, referring to commands such as "come here" or "no, come back."

"The risk of off-leash dogs in a park with a playground where kids play is very dangerous. Someone who thinks they know their dog and doesn't may let their dog off leash and it attacks a child. That's scary."

Nonya expressed her frustation over the daily occurences on social media about two weeks ago. Many of the responses came from people who said they frequented the park and observed similar behaviour as what Nonya described.

Among those who responded are dog owner Margaret Cotter. One solution, she suggests, is for the city to add a dog park in the area where people would be permitted to let their pets roam free without a leash.

"It's sad because we a lot of unused space that can be used correctly," said Cotter, adding the number of apartments in Sandwich Town could be leading some dog owners to Paterson Park.

"If they live in an apartment, they would prefer to have a dog park near the building so the dog can go and play if they don't have a backyard."

While Cotter agrees the quickest way to solve the ongoing issues at Paterson Park is for dog owners to ensure their pets are leashed while in that area, she said dog parks can connect communities in a way that other spaces can not replicate.

"You get to meet new people. You get to meet new breeds of dogs that you might not have thought to be a match for your family. If you're looking at buying a dog — and rescuing one, preferably — go a dog park and talk to the owners."

Cotter has a four-year-old dog named Rosie which lives as a service animal for her daughter with autism.

"When I take her to a dog park, she loves it. She runs up to the gate. She can't wait to get in. My daughter also gets to rollerblade," said Cotter.

"That's why we love places like Malden or Ford Test Track. The child can play and the dog can have its me time."

Some who commented on Nonya's social media post suggested the city either convert Paterson Park into a dog park or add a pet-friendly addition to the outdoor space.

According to Nonya, that idea would not work for the people who live around the park.

"They would have to petition the people around here before they do that. Our neighbors are not going to go for that because these dogs torment our as it is."

However, Nonya does agree with Cotter's idea that more dog parks in other parts of the city could help reduce the frequency of disturbances outside her home.

"Why not make more in areas you're trying to preserve? Add a dog park or two."

There was talk of impeachment Monday at the Trump Organization's criminal tax fraud trial -- not former President Donald Trump's, which happened twice -- but whether lawyers for his company were angling to impeach their own witness, longtime Trump accountant Donald Bender.

The Pakistani Taliban on Monday ended a months-long cease-fire with the government in Islamabad, ordering its fighters to resume attacks across the country, where scores of deadly attacks have been blamed on the insurgent group.

Two months after being fired, a former member of the Vancouver Canucks coaching staff has filed a complaint with the BC Human Rights Tribunal against the hockey team over alleged discrimination.

Notable moments, political statements made in Week 1 of the World Cup

As much as the action on the pitch has captivated fans across the globe, the 2022 World Cup in Qatar has also made important headlines for incidents off the pitch.