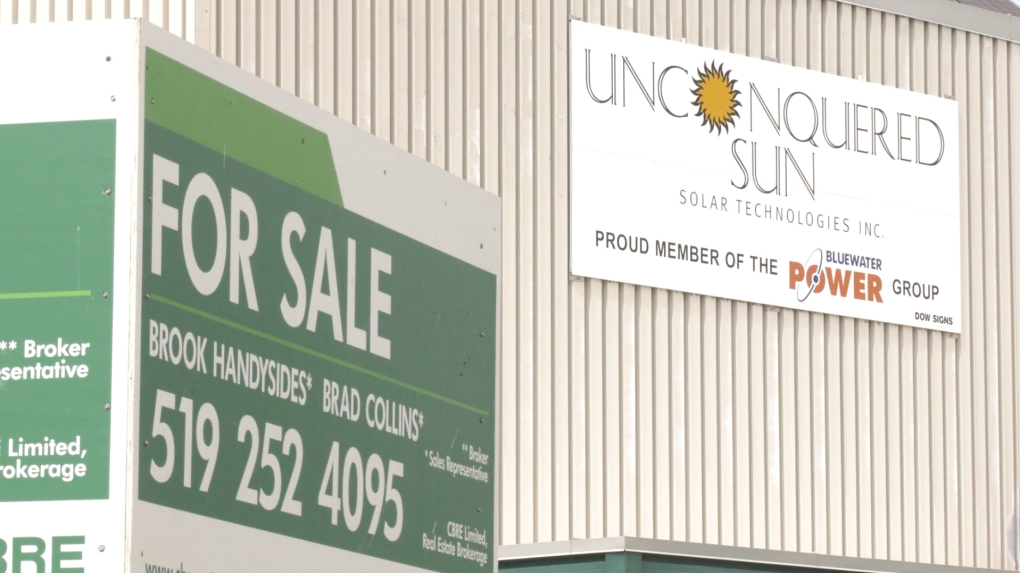 The Unconquered Sun facility at 11600 County Road 42 in Tecumseh has been put up for sale. Photo taken Thursday, May 28, 2020 (Ricardo Veneza / CTV Windsor)

WINDSOR, ONT. -- Another high-profile renewable energy company in Windsor-Essex is set to fade away.

On Thursday, Bluewater Power confirmed the decision has been made to pull the plug on Tecumseh’s Unconquered Sun.

“We have made the rather painful decision to close Unconquered Sun,” said Janice McMichael-Dennis, president and CEO of the Sarnia-based utility.

The Tecumseh company, which originally manufactured solar panels before focusing on installation, was bought by the public utility company in 2015. It was one of the first such purchases at the time.

The promise faded as the business became “no longer viable” according to McMichael-Dennis following the move away from Feed-In Tariff programs in Ontario.

“There was payment of over 80 cents per kilowatt hour for a solar contract,” said McMichael-Dennis, in an interview with CTV News. “Now, you can offset your own electricity usage, which is down to about 13 cents (per kilowatt hour), and that’s good for Ontario consumers in that it means electricity is cheaper now."

McMichael-Dennis says the pricing of electricity over the last five years has been a constant challenge — making solar panels a less attractive option for residential buyers.

The company is still operating but, McMichael-Dennis expects operations to completely wind down in the next month, or two “if we’re really, really lucky.”

While financial viability was a problem long before the COVID-19 pandemic, McMichael-Dennis says the health crisis had played its role.

“COVID certainly was the nail in the coffin,” says McMichael-Dennis. “The decision had been made to be clear though before COVID, but we had hoped to linger that out a bit and do a bit more this year.”

Three employees remain on staff, which peaked at about 15 since its creation in 2010 according to McMichael-Dennis. Now, the building has been put up for sale – listed at $2.05 million.

“I do think that eventually, it’s my personal belief, eventually you will see this industry come back. The problem with Unconquered Sun was we just couldn’t wait it out any longer.”

CS Wind, a wind turbine producer in Windsor, closed its doors and the property was sold for $12 million in July 2019. The company had also begun production in the early 2010’s as part of the Feed-In Tariff program.