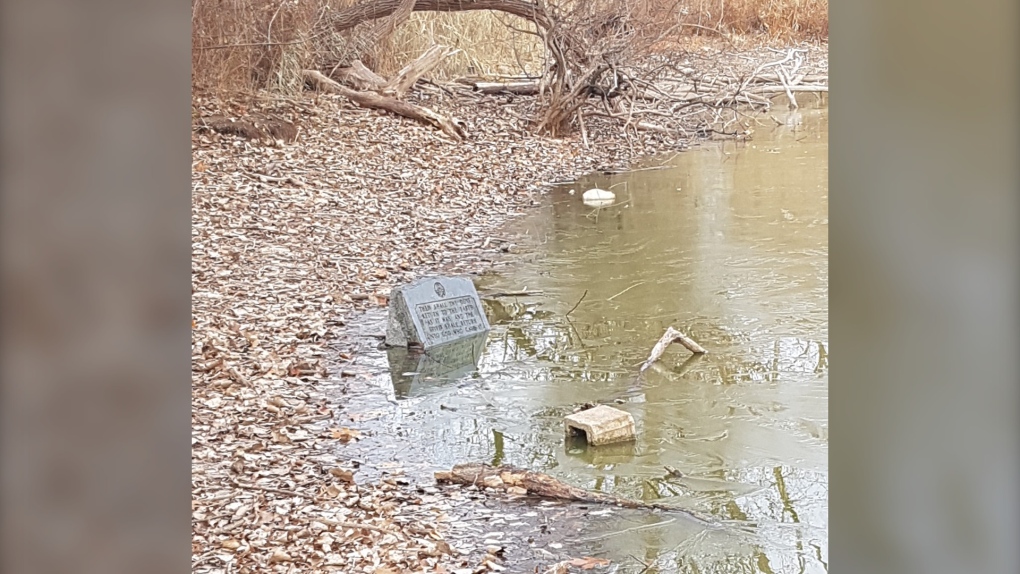 The Masonic Memorial monument is seen dumped in a pond at Malden Park in Windsor, Ont. in an act of vandalism. (Source: David Woodman)

Efforts are underway to repair the Masonic Memorial in Malden Park vandalized over the weekend. The 22-year-old freemasons war memorial was broken in two, dragged a couple of hundred feet and thrown into the nearby pond.

No suspects have been identified, and Windsor police welcome any information from the public regarding the crime.

Gene Lotz, a member of the committee that built the memorial, said this took a lot of effort to do and has great meaning in the community.

“They're here to reinforce our memories of the individuals that were lost during some of the great tragedies of history,” said Lotz. “It's important for the public to savour that, to remember that." 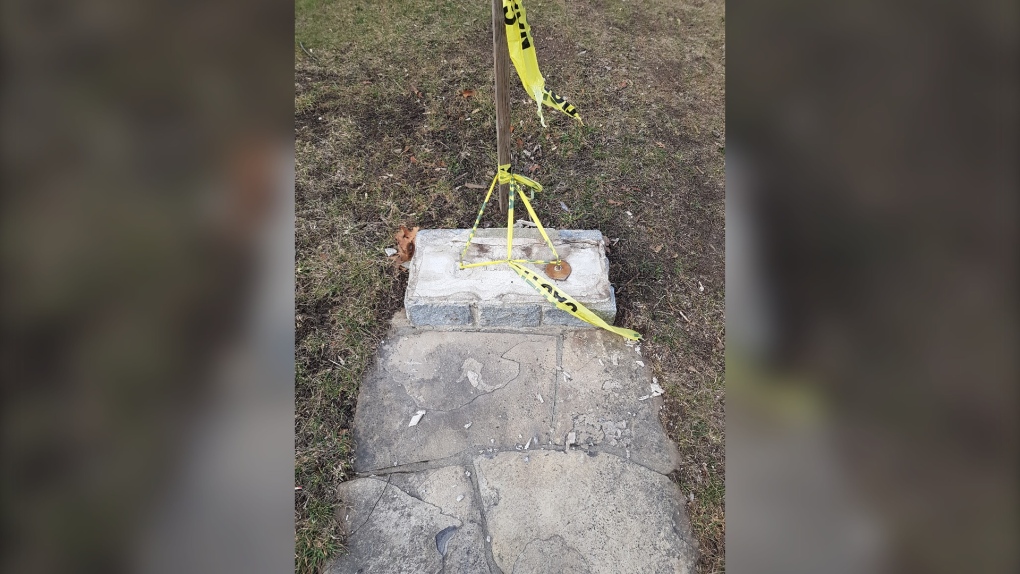 The granite marker of the Masonic Memorial in Windsor, Ont.'s Malden Park is damaged in this submitted photo. (Source: David Woodman)

The names of local freemasons who served in Canada’s armed forces during the two World Wars are inscribed on a marble tablet.

The damaged granite marker had inscribed an Old Testament passage — Ecclesiastes 12:7 — as a reverential tribute to our Canadian heroes:

Then shall the dust return to the Earth as it was,

And the Spirit shall return unto God who gave it.

Lotz hopes that with the aid of the city and the community, the monument will be restored to its former glory by the spring of 2023.

Hockey Hall of Famer Bobby Hull has died at the age of 84. He played for the NHL's Chicago Blackhawks and Hartford Whalers as well as the World Hockey Association's Winnipeg Jets over a 23-year pro career.

Girl, 6, dead after accident at ski resort north of Montreal on Sunday

WHO: COVID-19 still an emergency but nearing 'inflection' point

The coronavirus remains a global health emergency, the World Health Organization chief said Monday, after a key advisory panel found the pandemic may be nearing an 'inflection point' where higher levels of immunity can lower virus-related deaths.

The world is 'dangerously unprepared' for future pandemics, the International Federation of the Red Cross and Red Crescent Societies (IFRC) say in a report published on Monday, calling on countries to update their preparedness plans by year-end.

Are you a Ukrainian who recently moved to Canada? We want to hear from you

With Russia's invasion of Ukraine displacing millions of people, many refugees have begun to lay their roots in Canada. If you or someone you know has fled the war-torn country and settled in Canada, we want to hear from you.

Federal New Democrat Leader Jagmeet Singh says he will call on the House of Commons to hold an emergency debate on the privatization of health care.

COVID-19 global emergency isn't over: 5 things to know about the WHO decision

The World Health Organization decided Monday not to declare an end to the COVID-19 global public health emergency.

Marc Ouellet, the Quebec cardinal who oversaw the Vatican's powerful bishops' office and has been recently accused of sexual misconduct, is retiring.