A special dog who has become famous online celebrated his first birthday Saturday with a party fit for a hero at Charlotte’s Freedom Farm.

“Winnie the Roo” was born with some deformities due to some body parts not developing properly when he was in the womb, but that hasn’t slowed him down.

“Winnie is really out to show people that dogs with special needs and disabilities deserve a great life and to be adopted,” said Charlotte’s Freedom Farm founder Lauren Edwards.

“A lot of people's first impression when they see him is to say ‘oh, poor dog’ or to feel sorry for him and it’s the absolute last thing you think when he's just living, loving life and having a blast.”

Edwards said Winnie has a custom wheelchair and a nub cover for one of his front arms so that he can run around and play with all of his friends on the farm. 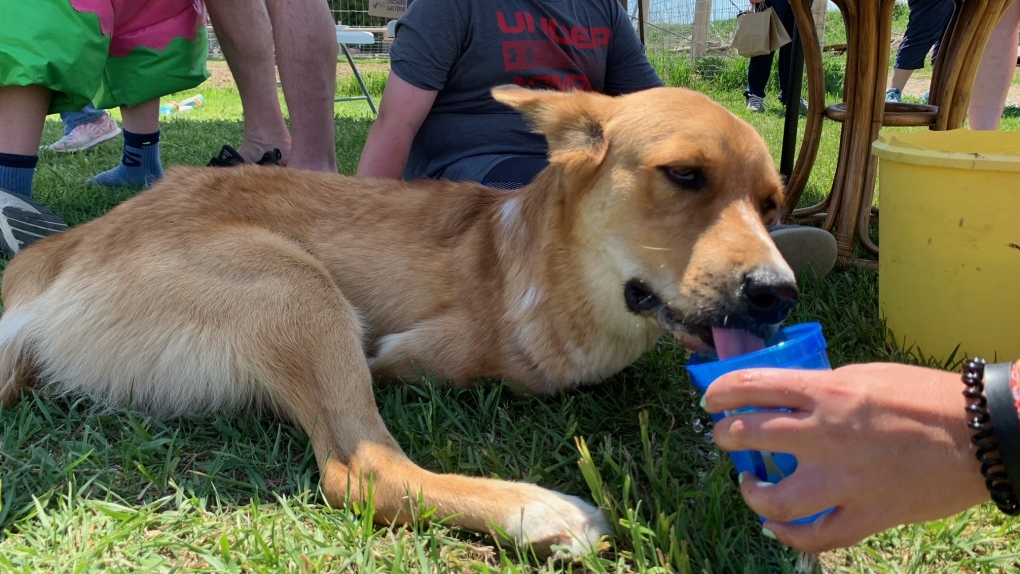 Winnie the Roo at his first birthday party at Charlotte's Freedom farm near Chatham, Ont. on Saturday, May 14, 2022. (Chris Campbell/CTV Windsor)

“He hangs out with all the orphan animals from baby goats and sheep and ducklings,” she said. “He just makes it easy, that's for sure.”

Winnie has gained worldwide attention online. As of his first birthday, the young dog has over 30,000 followers on Instagram (@winnie_the_roo_) and over one million views on a video he was featured in on The Dodo’s YouTube channel.

Winnie received a superhero-themed party complete with a bouncy castle, superhero sumo suit wrestling, an inflatable soccer game, snacks, and dozens of gifts from around the world.

Edwards said Winnie’s party offers families a chance to come out and visit the farm, and see all of the animals while supporting the sanctuary.

“We're just trying to show people they can live a great life,” she said. “There are a ton of animals like Winnie out there that do need homes and a dog in a wheelchair isn’t a big difference from a dog with four working limbs, it really isn’t.”

The annual gathering of the Assembly of First Nations is being held this week in Vancouver under a cloud of criticism from its national chief, who has been suspended and denied entry to the meeting.

Saving for retirement is becoming out of reach for young Canadians

A day after Russian President Vladimir Putin declared victory in seizing an eastern Ukraine province essential to his wartime aims, a city in the path of Moscow's offensive came under sustained bombardment, its mayor said Tuesday.