After a severe storm, every variety of apple has been down-graded at Meleg’s Lakeview Orchard in Kingsville, Ont.

“We’ve had hail before,” says owner Tom Meleg. “But never the kind of devastation we had on July 1st.”

Meleg says the storm started at 6 p.m., with hail and high wind, and seemed to come in repetitive “waves.”

“It (the storm) just came again, again, with a lot of rain,” he says. “After a minute, the hail already did the damage.”

When he surveyed the damage afterwards, Meleg says the shards of “jagged” hail was still visible on the ground.

“It just drove the hail right into the plants. Into the trees. It cut the leaves,” says Meleg. 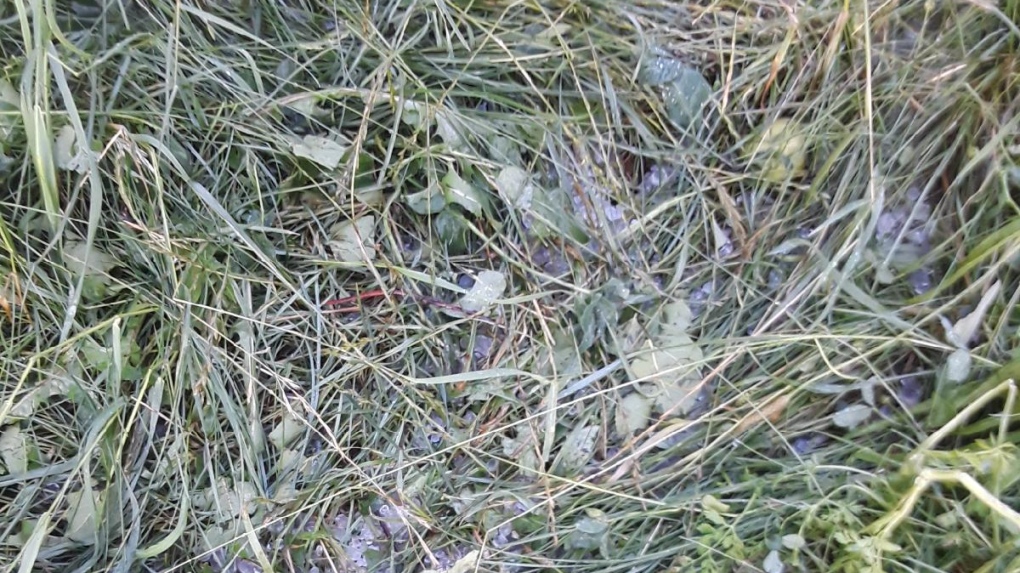 Hail is still on the ground, minutes after a storm ripped through Essex County on July 1. (Courtesy Tom Meleg)

A crop insurance adjustor told Meleg it was the worst she’s ever seen, and she works right across Ontario.

The entire crop of 25 acres of apples was damaged and is not fit to go to a packer who would package the apples up for a grocery store.

“They have to be perfect,” says Meleg but most of the apples have bruises and would just get thrown away by a packing company.

What’s worse, the storm damage hurt the trees themselves, making them susceptible to fire blight.

“It’s a bacterial disease,” says Meleg. “The tree looks burnt up. The tips of the branches will die and just turn brown.”

All of those dead branches will now have to be cut off, once the growing season is over.

Meleg’s is now offering their apples at 50 per cent off to U-Pick customers until the growing season ends at the end of October.

What apples are left, will be harvested and sent directly to a juice factory near Georgian Bay.

“If people support us, we’ll be fine,” says Meleg. “The apples still taste the same. They might not look as good, but they taste great.”