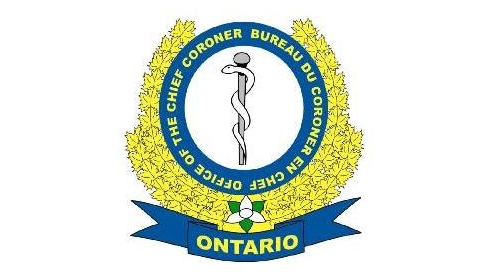 The logo for the Office of the Chief Coroner of Ontario is seen in this file image.

An inquest will be held into the death of a man who died from injuries received while working at a construction site in Windsor, the Office of the Chief Coroner of Ontario announced Thursday.

Dr. Rick Mann, regional supervising coroner for the west region, confirmed there will be an inquest into the death of Takis Escoto.

Escoto, 34, died on June 1, 2011, at Hôtel-Dieu Grace Hospital from injuries received during the course of his employment at the construction site, the coroner’s office says.

An inquest is mandatory under the Coroners Act. It will examine the events surrounding Escoto's death.

The jury may make recommendations to prevent similar deaths.

The inquest is expected to last four days and to hear from approximately seven witnesses. It is scheduled to begin at 10 a.m. on Monday, Oct. 28, at the Provincial Courthouse in Windsor.

Dr. Curtis Fedoruk will preside as inquest coroner and Frank Schwalm will be counsel to the coroner.