A Windsorites' challenge: 'Wouldn't it be fun to ride 1,600 kilometers and go somewhere?'

A Windsorites' challenge: 'Wouldn't it be fun to ride 1,600 kilometers and go somewhere?'

Martin O’Gorman has cycled his way to Quebec to raise money for cancer research at Toronto’s Sick Kids Hospital.

“There are several thousand cyclists [who are] part of the Great Cycle Challenge, but each one does their own individual ride,” O’Gorman told CTV News Windsor during a virtual interview Saturday from Saint-Roch-des-Aulnaies, Que.

The 61-year-old left Windsor on Aug. 1 and cycled alone for approximately 100 kilometres per day, on a route he plotted back in October 2021.

“I've met different family members along the way. I stayed at my son and daughter-in-laws. I’ve stayed at my brother's house. I've stopped for breakfast at my nieces in Kingston. It's just been a wonderful, wonderful experience,” says O’Gorman.

His wife Michelle met O’Gorman on Aug. 8 in Cornwall, Ont. to support the last legs of the journey.

“Which was a really big help because then I was able to unload about 35 pounds of gear,” O’Gorman says.

“I'll zoom by him and try to snap a few pictures while he's in motion and he's smiling from ear to ear. So it's pretty special,” Michelle O’Gorman adds.

She noted it’s also an adventure for her because she learns the days’ route when they set out in the morning.

“I'm trying to stay away from the main highways because it's just not as scenic,” O’Gorman says. “I try to take the same path because it's a little more scenic, but I can't always stay on it because sometimes it veers off into bike paths only.”

The last two years, O’Gorman has participated in the challenge by biking locally.

“I thought, ‘Well, wouldn't be fun to ride to 1,600 kilometers and go somewhere instead of just riding around Windsor-Essex County?’” he says.

He has noticed there are a lot more cyclists in Quebec than here at home.

“I really, really am enjoying that part of it, seeing so many people like me out on their bikes, having fun," he says. 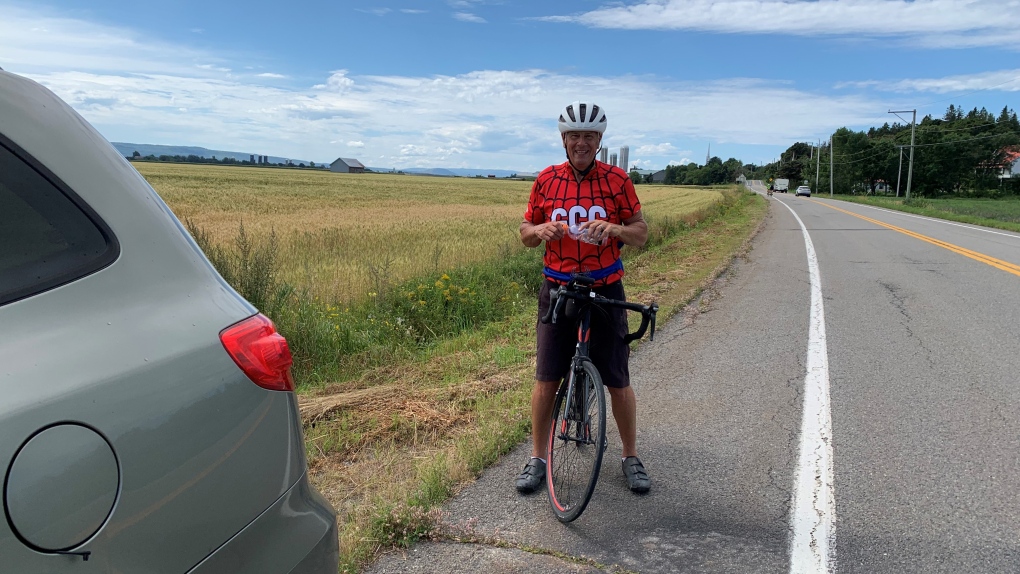 Martin O’Gorman of Windsor is biking to Quebec as part of the Great Cycle Challenge. (Source: Michelle O’Gorman)

That’s not to say however that the journey has been easy.

O’Gorman admits Saturday was a difficult day, telling CTV News Windsor, “I just kind of hit a wall at about 50 kilometers.”

“I stopped and I ended up at a park where they had some sand sculptures and actually a gentleman [was] outside playing piano overlooking the St. Lawrence [River] and somehow that kicked everything back into gear and I flew out of there,” says O’Gorman, who is no stranger to struggling with his health.

One month before leaving Windsor, O’Gorman suffered a bicep injury after he collided with his son at hockey. In addition, he has already had one hip replaced and is on a wait list to have surgery on his other hip.

“There was no way I was not going to do it [the challenge],” O’Gorman says, and adds that he feels “very fortunate” to be able to continue biking.

O’Gorman says he’s already raised money for ovarian cancer research in the past, after his first wife was diagnosed.

Now he wanted to raise money for a charity he had no personal connection to.

“As a teacher, I’ve witnessed the devastation caused by a cancer diagnosis but I’ve also witnessed the amazing progress we have made with research,” he says.

O’Gorman is a retired teacher from the Windsor-Essex Catholic District School, having taught at Brennan, Ste. Anne’s and Villanova.

O’Gorman will cycle to Rivière-du-loup Sunday, and finish Monday “with a big celebration” in Rimouski, Que.