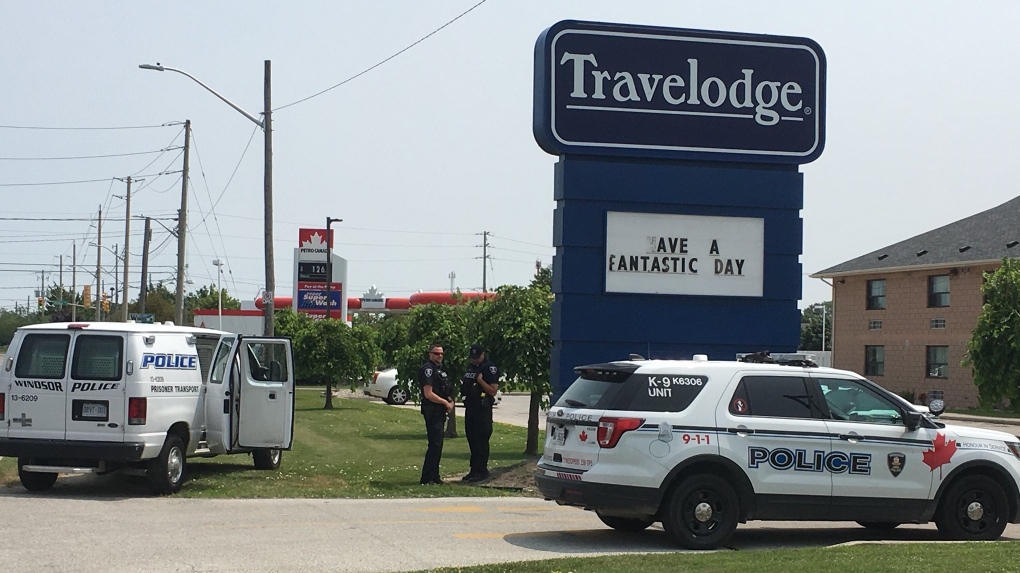 Three people were arrested at a hotel on Division Road in Windsor, Ont., on Tuesday, July 9, 2019. (Chris Campbell / CTV Windsor)

Windsor police have now released the names of three suspects and the charges they face in the latest shots fired investigation.

Patrol officers responded to a report of shots fired in the 1600 block of Drouillard on Tuesday at about 6:50 a.m.

Officers located spent bullet casings and obtained a description of a suspect vehicle that was located shortly before 10 a.m., parked and unoccupied in a lot in the area of Walker Road and Division Road.

The vehicle was seized for examination and that investigation led officers to Travelodge on Division Road where two men and one woman were arrested at about 12:30 p.m. Police also seized a firearm.

Taylor Chickee, 22, of Windsor is charged with a possession of a firearm without a licence.

Hussein Khalfan, 25, of Toronto is charged with possession of a firearm without a licence.

Faruuq Osman, 23, of Scarborough is charged with possession of a firearm without a licence.

No other information is being released.

Residents on Drouillard Road tell CTV News they thought they heard gun shots around 9 p.m. Monday. They claim police were around for a bit and returned Tuesday morning after a second instance of shots ringing.

"At times there have been reports of gunfire and it turns out to be anything from a car backfiring to fireworks to true gun fire," says Betteridge. "We're trying to determine exactly what was gun fire and what was maybe something else."

The investigation appears to be centred around a business in the neighbourhood, but police will say only officers continue to look for clues as the matter remains under investigation.

This is the second incident involving gunfire in less than a week. Three people were arrested after gun shots hit a home at Mercer Street and Elliot Street East on July 3.