'The hurt we feel is indescribable': Walpole Island First Nation calls for national day of mourning

WINDSOR, ONT. -- The Walpole Island First Nation is calling for a National Day of Mourning and a shutdown of all business activity following the discovery of 215 children at a mass grave at the Kamloops Indian Residential School in B.C.

“We know that they suffered much pain, horror and abuse,” says Chief Charles Sampson. “Now, we can openly grieve with those broken families who could not welcome home the return of their little ones. The hurt we feel is indescribable.”

They are honouring the children by placing shoes at the residential school monument on Walpole Island.

Flags have been lowered and replaced with orange flags to commemorate the deceased.

Similarly in Windsor, children’s shoes can be seen on the steps of Assumption Church.

Ostoro Petahtegoose sat in front of the church Monday afternoon to draw 215 hearts, each representing one of the children found.

“This is something that we’ve known, Indigenous peoples, for a long time.”

Petahtegoose says their grandparents went through the residential school system, and heard stories about missing children. They say it’s heartbreaking.

“You know that the stories are bad but then when the stories surfaces that it’s this many children for one school? It’s horrifying on a much larger scale than I think I ever imagined.”

A slow, but steady stream of people wearing orange have come to the church steps to places shoes and observe a moment.

Caldwell First Nation Acting Chief Robyn Martin says a sacred fire has been lit in honour of the 215 children, adding it will burn for 215 hours.

“All of us feel it. We felt it for generations, and we knew that these types of things happened at residential schools that it was just vile behaviour that occurred.”

“These are innocent babies that were just discarded as if they didn’t matter. I think that is what is hitting everybody so hard.”

Martin explains it’s something that needs to be talked about on many levels, adding the discussions that need to take place have been swept under the rug.

“I just pray that they make their way home to their home communities, their parents can get closure and they can finally have a peaceful final resting place."

Officials with The Southwest Ontario Aboriginal Health Access Centre observed a moment of silence at 2:15 p.m. Monday  at all COVID-19 vaccination sites and at the Assumption Parish memorial.

The City has lowered Canadian Flags at government buildings and on Windsor’s riverfront.

“The deaths of these children is a national tragedy. While the federal government must proceed with the investigation, it is important now for all of us to acknowledge the innocent young lives lost,” says Chatham-Kent’s Mayor, Darrin Canniff.

Flags are also at half-mast In Chatham-Kent and in Essex and will remain lowered for 215 hours, until Wednesday, June 9.

“Our thoughts are with the family members and communities of these children whose lives were so tragically lost,” said Warden Gary McNamara. “Lowering flags at County of Essex facilities is our gesture of solidarity with Indigenous Peoples across Canada. They have suffered the pain of the shameful legacy of the residential school system and the damage it inflicted.” 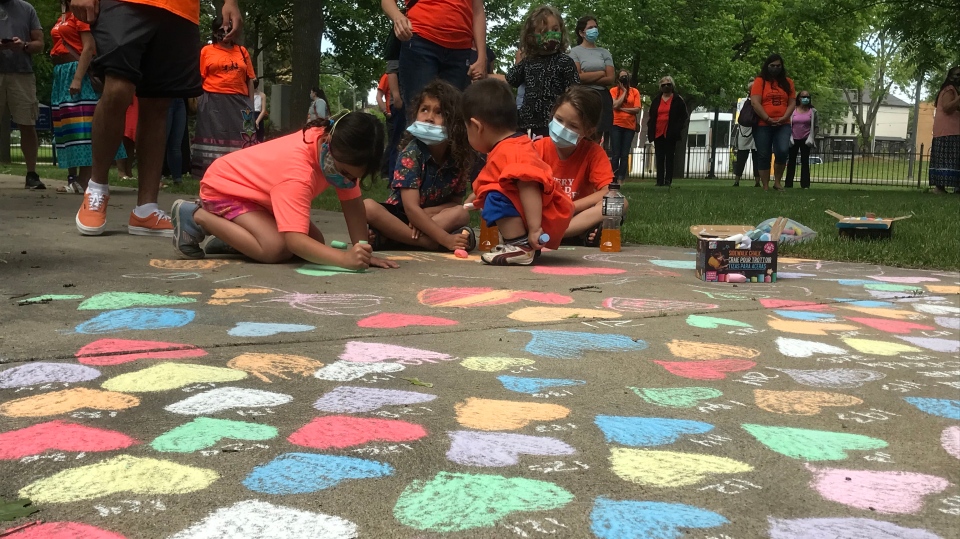 Prime Minister Justin Trudeau on Sunday ordered the lowering of flags on all federal buildings and sites across Canada. A number of communities throughout Canada are also taking part.

The 215 bodies were discovered earlier this month at the site of the former Kamloops Indian Residential School. Ground-penetrating radar was used to locate them. The abuse and neglect of Indigenous children at residential schools is described in detail in the final report of the Truth and Reconciliation Commission, which was released five years ago. It says at least 3,200 of those children died.

Officials with Walpole Island First nations are calling for justice and are requesting the following actions take place:

• That the implementation of past “Indian Policy” by the Canadian government and the Churches must be investigated, held accountable and dealt with under an international court of law;

• That Canada be held accountable for this legislated system of horror, we are dealing with crimes against humanity and this history of government mistreatment which includes genocide and ethnic cleansing must be exposed to all Canadians and the international community of Nations;

• That all children who attended residential schools must be accounted for, and those that went missing must be identified and given proper ceremonial burial;

• That all history books and teaching materials be rewritten to expose the truth on how the Anishnebek and their children were treated in the residential school system and the reasoning for this mistreatment must be accurately and properly explained.