When Matt Gervais jumped into Lake St. Clair for a three kilometre swim Friday morning, he didn’t expect it would end with 13 stitches and a too-close-for-comfort interaction with a Muskie.

Gervais has been competing in triathlons and Ironman triathlons for two decades and has been open-water swimming as long as he can remember — largely without incident.

“Typically we love it out there, the water’s been warm, flat and clear. Up until Friday,” Gervais says. “Friday was not a good day.”

He was about 10 minutes into a swim with a friend just past the launch beach at the foot of Clover Street and Riverside Drive when he says he felt a strange burning sensation on his hand.

“I grabbed onto my right hand and I felt the pain, I grabbed onto (the fish) with my left hand, pulled it off and just couldn’t believe what happened,” Gervais says.

“Carnage. Right away, blood was dripping down to my elbow,” he says. “It was a lot of pain. It hurt really bad, right away.”

Gervais and his swimming partner made their way ashore just east of Sandpoint Beach and climbed a ladder into a stranger’s backyard, who helped Gervais tend to the wound while they awaited an ambulance.

He was later stitched up with 13 sutures at the Tecumseh Medical Centre. The doctor even pulled a tooth from Gervais’ knuckle. 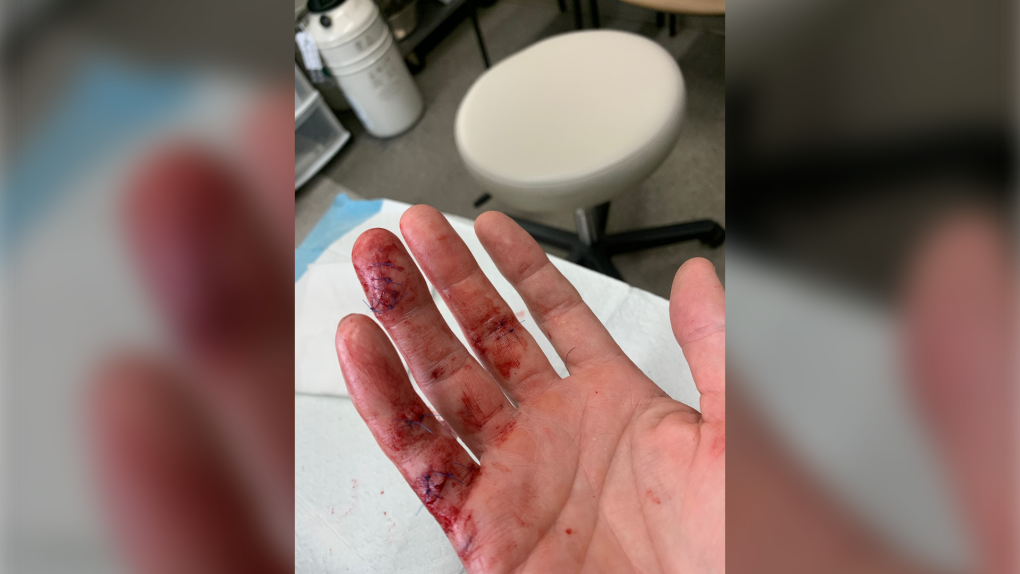 Matt Gervais had his hand bitten by a Muskie during an open water swim in Windsor, Ont. (courtesy Matt Gervais)

Trevor Pitcher, a professor at the University of Windsor’s Great Lakes Institute for Environmental Research (GLIER), says Muskie — or Muskellenge —  are a prevalent, apex predator in the Great Lakes.

They’re characterized by their canine teeth, which are up to about an inch long, but also the fact that they have teeth on their tongues and on the roof of their mouths.

Pitcher adds a Muskie interaction would be almost unmistakable because of their size and distinguishing characteristics.

But Pitcher says “human flesh is not part of the Muskie diet” and chalks it up as a “mistaken Muskie attack.”

“What happens, we believe, is Muskies mistake that for the appearance of a prey fish. So this is how attacks generally happen. It’s not that the Muskie are intending to bite people but they usually bite the extremities,” he says.

Pitcher adds the occurrence of something like this is incredibly rare and says it shouldn’t be a cause for concern for people who swim or dangle their toes in the Great Lakes.

“We’re talking of hundreds of people, thousands of swims, this is the first time we’ve ever had an incident. So this is a freak occurrence,” says Gervais, who is training for a half-Ironman race in two weeks in Muskoka.

He’s hopeful the wounds will heal in time for the race but isn’t too sure how he feels about immediately jumping back into the water.

“It’s sort of burned into the back of my mind there. It’s going to be tough to get back into the lake,” he says, noting he does plan on resuming open-water training once the doctor gives him clearance. “I would have no problem in other lakes. But I’m sure when I pass that point on any swim in the future, it’ll still be there in the back of my mind.”

“There’s always that kind of ‘what does lurk beneath?’ And now we have a better idea of what’s out there.”

Convoy participant Pat King was involved in the planning and logistics of the Freedom Convoy protest, despite denials of his participation by organizers, according to court documents obtained by CTV News.

Highland Park's police chief said the 22-year-old man identified as a person of interest in the shooting that killed at least six people, wounded at least 30 and sent hundreds of people fleeing from an Independence Day parade in suburban Chicago on Monday has been taken into custody.

Former Saskatchewan premier Brad Wall was in contact with a key organizer of the Freedom Convoy anti-mandate protest, providing strategic advice before and after the Ottawa occupation began, according to court records obtained by CTV News.

One of the twin brothers who was killed in a shootout with police outside a bank in Saanich, B.C., last week had applied to join the Canadian Armed Forces but was rejected, a military spokesperson confirmed Monday.