At 10 a.m. on Tuesday, Canada Border Service Agency reported the Ambassador Bridge is “temporarily closed” to traffic from the United States to Canada.

Police in Windsor, Ont. say the exit from the Ambassador Bridge onto Huron Church Road is “temporarily interrupted” in both directions due to the presence of protesters. Police are advising drivers to avoid the area or find alternate route, if possible.

According to an update from Essex County OPP there is now “limited access” to the United States bound traffic on the Ambassador Bridge.

Police continue to ask travellers to avoid the area or find an alternate route.

Traffic Update: Northbound traffic on Huron Church from Tecumseh Rd W is blocked off. Ambassador Bridge can still be accessed via Wyandotte St. W. Avoid the area if possible. dg 12833.

Windsor Police tweeted Tuesday morning that vehicles are able to access the bridge from the Wyandotte Street West entrance.

U.S. bound is open at the Ambassador Bridge and can be accessed from the Wyandotte St. West entrance. dg 12833. 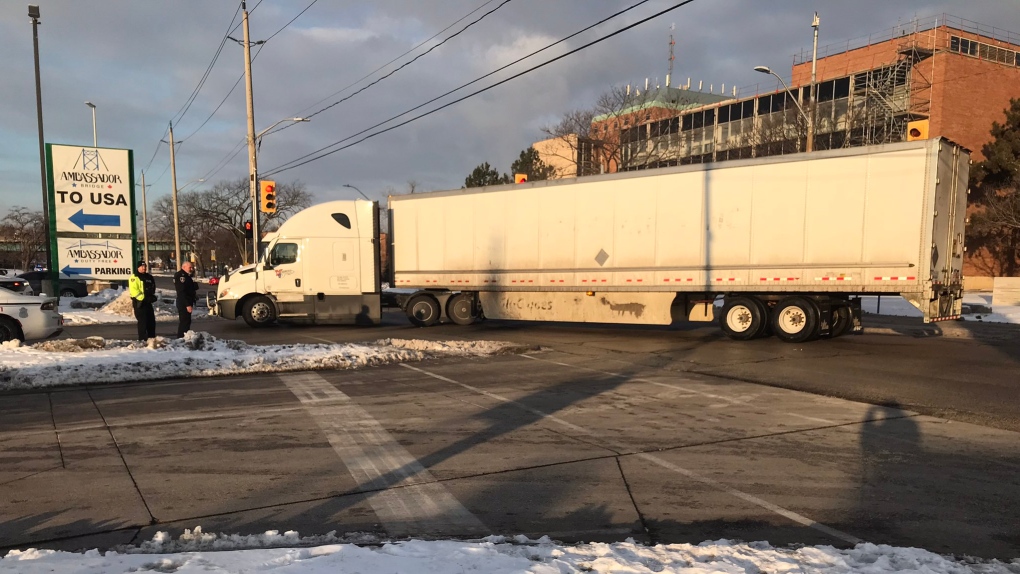 The Wyandotte Street entrance to the Ambassador Bridge border crossing in Windsor, Ont., on Tuesday, Feb. 8, 2022. (Rob Hindi / AM800)Officers say they are working to restore the orderly flow of traffic in the safest manner possible.

“Our priority is the safety of all involved, the general public and property in surrounding areas,” Windsor Police said in a post on Twitter Monday. “We urge anyone involved in the demonstration to act lawfully, peacefully and respectfully. We will respond to unlawful activities or actions in an appropriate and professional manner.”

The traffic interruption is in support of the “Freedom Convoy” protest in Ottawa, where the city remains under a state of emergency. It is protesting all COVID-19 mandates.

Windsor police said in an update Tuesday afternoon their focus is on, “maintaining open communications with organizers of the demonstrations and using a reasoned, tempered approach, including the appropriate use of police discretion to guide our police personnel's responses.”

Police say there is a large police presence monitoring the demonstrations. Officers have been on scene addressing traffic points, public safety and enforcement.

All three lanes of south-bound traffic have been blocked at the corner of Huron Church and College Avenue at the foot of the Ambassador Bridge, snarling traffic back across the bridge and into the United States.

One protester told CTV Windsor he slept in his car overnight and he plans to do that every day until the federal government makes some changes. CTV Windsor approached a number of other demonstrators on Huron Church Road on Tuesday and they declined to comment.

Huron Church Rd. closed off bet. College & Tecumseh Rd W. for all traffic. Avoid the area. We urge those involved not to endanger members of the public, jeopardize public peace or participate in illegal events. Those found committing crimes will be investigated & charged. dg12833 pic.twitter.com/DZDwY69gDs

Officers say so far it has been peaceful, and no arrests have been made.

Traffic at the Ambassador Bridge remains at a stand still with protesters holding their ground @CTVWindsor pic.twitter.com/G2WR3chSbP

As of 7:14 p.m. Monday, the Canada Border Service Agency was reporting a four-hour delay at the Ambassador Bridge from United States to Canada.

“The Agency can confirm that demonstrations are contributing to significant border wait times at the Ambassador Bridge port of entry (POE). Travellers, including truck drivers, may wish to use other ports of entry and consult the Directory of CBSA Offices and Services to confirm hours and availability of service before they head out. Please note that not all ports of entry can accommodate commercial traffic,” a statement from CBSA said.

A border alert was issued at 8:45 p.m. noting the Ambassador Bridge was experiencing a service disruption and users may encounter delays, encouraging travellers to consider alternate ports of entry.

Since then, OPP say large traffic backups have been created at the Bluewater Bridge in Sarnia as it was suggested as an alternate port of entry for commercial traffic heading to the U.S.

As of 3:56 p.m. Tuesday, CBSA says there is a two-hour and 15-minute wait for commercial traffic at the Bluewater Bridge.

CBSA said at this time, no traffic is being blocked from coming into Canada at any other POEs.

U.S. Customs and Border Protection was reporting no wait times from Canada to the United States at the Ambassador Bridge, but more than two hours at the Bluewater Bridge in Sarnia.

Major traffic delays both northbound and southbound of Huron Church Rd to the ambassador bridge as demonstrators take 2 leans of traffic. @WindsorPolice continuing to have a heavy presence in the area #Windsor pic.twitter.com/81nEBjSb2I