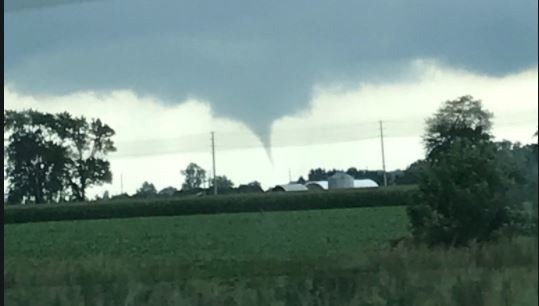 A funnel cloud was seen near Ridgetown on Sunday, July 29, 2018. (Nicole Carriere / Twitter)

It was a day of severe weather warnings across the region Sunday.

Funnel clouds were spotted near Ridgetown but there was no report of a tornado touching down.

The storm was downgraded in the early afternoon to a severe thunderstorm warning. Storms affected the region throughout the afternoon.

CTV Windsor meterologist Gary Archibald said there were a number of cells that produced heavy rainfall, strong winds, with the potential for hail and even tornadoes.

Environment Canada said severe thunderstorm watches are issued when atmospheric conditions are favourable for the development of thunderstorms that could produce one or more of the following: large hail, damaging winds, torrential rainfall.