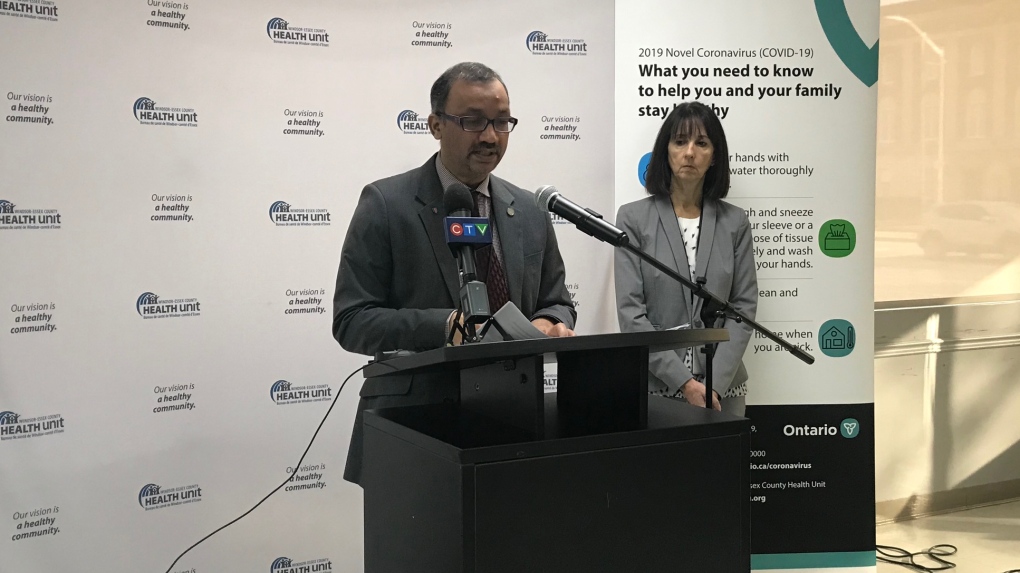 WINDSOR, ONT. -- The Windsor-Essex County Health Unit (WECHU) says a sixth case of COVID-19 has been confirmed in the region. It is the first case in a hospitalized patient.

The patient is a woman in her 60s who recently travelled outside the country. She developed symptoms on March 18 and went to the COVID-19 Assessment Centre five days later, and was then admitted to Windsor Regional Hospital the following day.

She remains in hospital as the WECHU reaches out to her close contacts.

“The necessary precautions were taken since the patient first came to hospital,” said Windsor Regional Hospital President and CEO David Musyj in a release. “The patient is being cared for by our amazing and capable team members."

Windsor-Essex medical officer of health Dr. Wajid Ahmed said in a statement, "As we continue to see cases rise in our area and in the United States this sixth case is a reminder to be vigilant, stay home, and self-isolate if you have traveled, including distancing yourself from family,”

The fifth local case, announced Thursday morning, was a man in his 30s with no international travel, but he had travelled in Ontario.

The man was tested in Toronto and is now self-isolating at home with mild symptoms. He started feeling symptoms on March 15.

Close contacts of the man are being contacted by the WECHU and will be instructed to self-isolate and seek assessment and testing upon development of symptoms.

The health unit confirmed Thursday morning that there have been 650 people tested in Windsor-Essex, with 453 tests pending.

“We have been told by public health Ontario that they prioritize the testing,” says local health unit CEO Theresa Marentette.

The wait time, even with a lab in London taking cases, is about seven days, but Marentette says she hopes that will get faster.

“We hope by next week they will hear back with test results in a couple of days,” says Marentette.

Health unit officials say they have received a lot of questions regarding Personal Protective Equipment or PPE (masks, gloves, gowns).

There are many recommendations regarding PPE from various sources and Ahmed says it is important to remember that as we learn more about COVID-19 the types of PPE that is required changes based on new information.

Ahmed says there is no requirement or need for individuals who have no respiratory symptoms to wear PPE in the community.

“The best defense against COVID-19 is soap and water and distance,” says Ahmed. “Wash your hands regularly, keep a physical distance from others (two metres), and stay home.”

Ahmed says it is imperative that they ensure they have the supply of PPE for our healthcare workers and caregivers when they need it.

“We all can be good stewards of PPE by knowing when and where it is needed,” he added.

Windsor Regional Hospital and municipal partners are currently collecting supplies including donations for much needed Personal Protective Equipment for distribution to healthcare workers.

The WECHU is working with partners to provide masks, including homeless shelters and will be sending 2000 gowns to the WRH this week.