Group of residents show love to WE Trans Support office 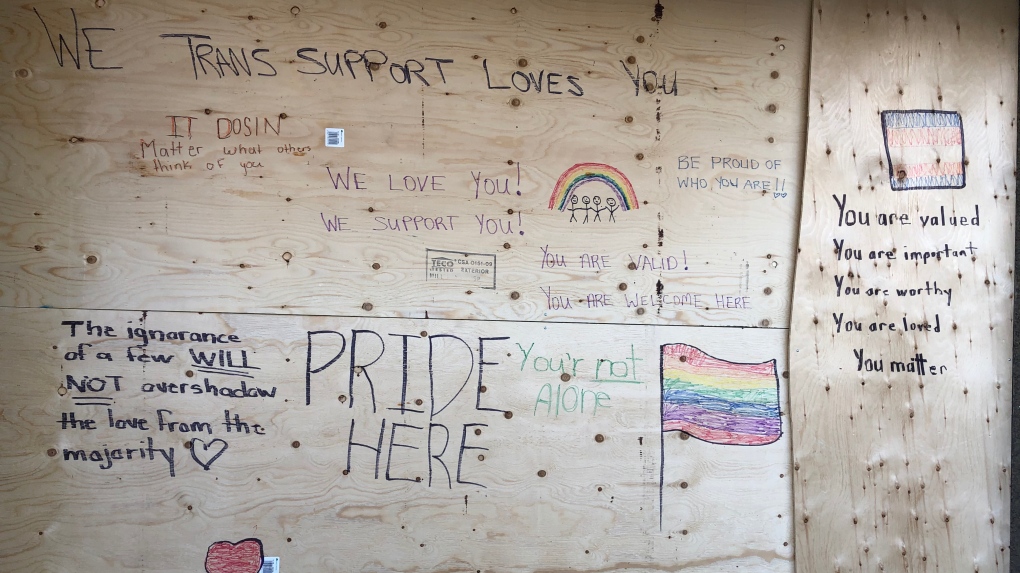 A group of volunteers gathered at the WE Trans office to transform a boarded-up wall after the organization was the target of vandalism in Windsor, Ont. on Wednesday, Feb. 24, 2021. (Alana Hadadean/CTV Windsor)

WINDSOR, ONT. -- WE Trans Support executive director Alexander Reid recalls the gut-wrenching feeling when he walked into work to witness not one, but three acts of vandalism in a week’s time.

The organization’s office had been defaced with homophobic slurs, swastikas, and windows were smashed — but now local residents are stepping in to make sure the vandalism doesn’t get the last word.

“I thought it was a wonderful idea to combat that vandalism with some positive affirmation, Reid said. “Some Messages of love and support for the queer and transgender community.”

Armed with colourful markers and sharpies, a team of volunteers gathered at the We Trans headquarters Wednesday afternoon to transform a boarded-up wall in place of the office’s broken front window. 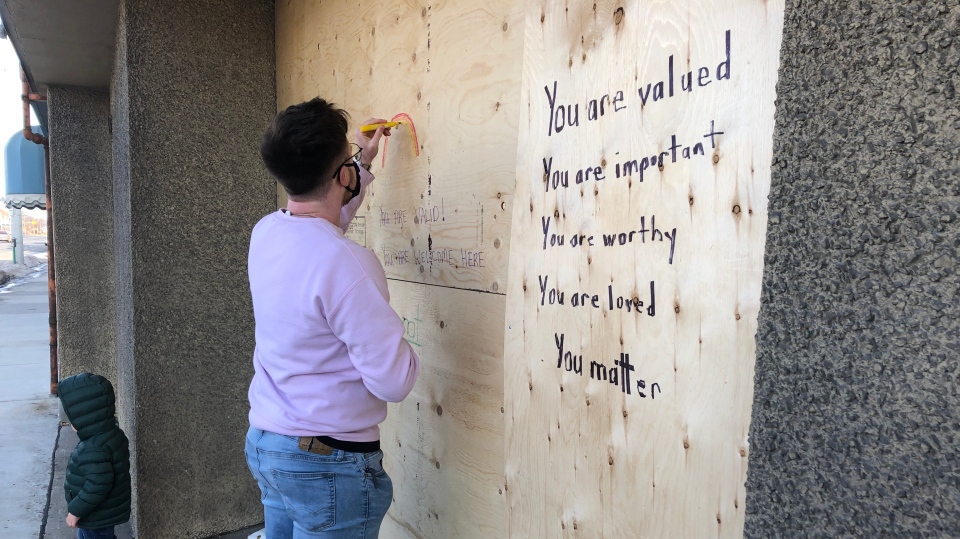 “We feel that all people should feel loved and respected regardless of their gender and sexual orientation. Everybody is important,” Annette Reid says.

“We want to come and spread kindness for everyone else around here that also doesn’t feel they are being accepted,” says Peyton O’Brien.

“(We’re) going to write some message to tell people they matter and all of that and everybody will be able to see them,” Madison O’Brien says.

The We Trans Support office faced three separate incidences of vandalism, with the latest escalating to property damage when a “rusted brake rotor from a vehicle” was thrown through the organization’s window. Windsor Police Service public information officer Darius Goze says it is being investigated as a hate crime.

“This investigation is being considered a hate crime because the motivation to commit the act is related to prejudice of a person based on their sexual orientation,” Goze says.

WE Trans director, Alexander Reid, says there has been an overwhelming outpour of support from the community all week long.

“Letters of support from the mayor, Drew Dilkens, from different agencies, from local churches,” Reid said. “People are really reaching out as a community and showing us we are loved and wanted here.”

A GoFundMe account has raised more than $13,000 for repairs.

“As head of an agency that fighting towards equality and fighting towards inclusion for my queer and trans community members, it’s really showing that we are included and loved here,” Reid says