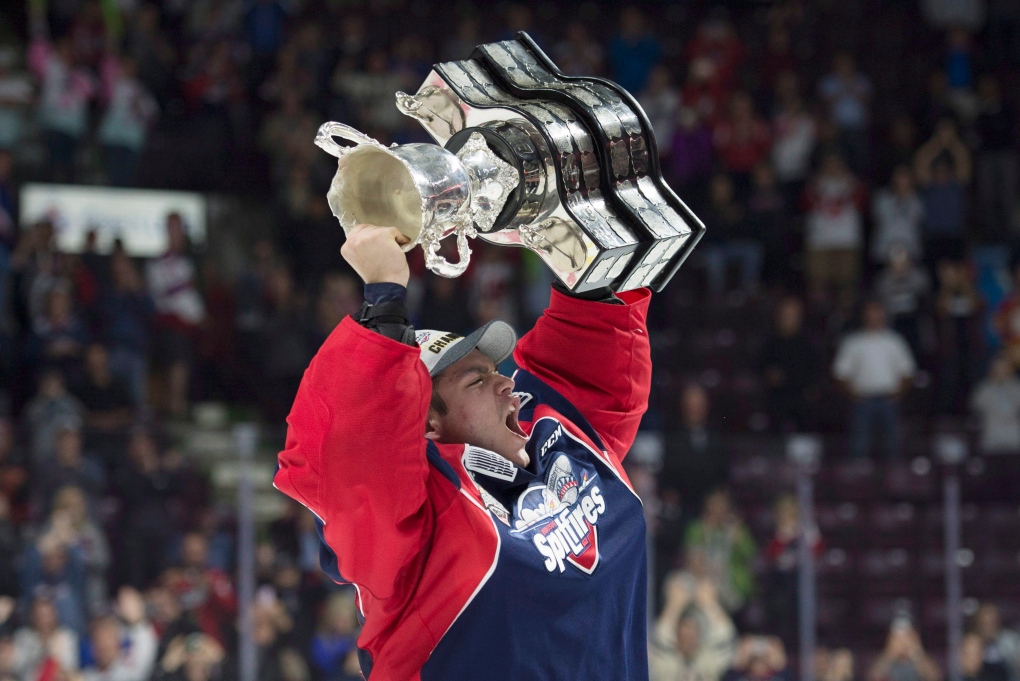 Windsor Spitfires goalie Michael DiPietro hoists the trophy after defeating the Erie Otters to win the Memorial Cup in Windsor, Ont., on Sunday, May 28, 2017. (Adrian Wyld / THE CANADIAN PRESS)

DiPietro, a star goaltender with the Windsor Spitfires, has signed a three-year, entry-level contract with the Vancouver Canucks.

DiPietro was recently named the Ontario Hockey League Goalie of the Year and was part of Canada’s roster at the World Hockey Championship.

DiPietro, 18, appeared in 56 games this season carrying a 29-21-3-1 record.  He produced a league-high seven shutouts while posting the league’s third lowest goals-against-average with a mark of 2.79 and a save percentage of .910 that tied for fourth overall. His seven shutouts not only led the OHL this season but established a new Spitfires single season record surpassing the mark of six he set in 201dip6-17. It also raised his career total to 15, also a team best.

DiPietro was selected by the Canucks in the third round of the 2017 NHL Draft going 64th overall.

In three seasons with his hometown Spitfires, DiPietro has compiled 75 career wins and sits just three behind franchise record holder Andrew Engelage with 78 from 2006-09. His 15 career shutouts are also one shy of the OHL record 16 set by Thomas McCollum between Guelph and Brampton from 2006-09.

DiPietro also backstopped the Spitfires to a 2017 Mastercard Memorial Cup title winning on home ice where he was named top goaltender and to the tournament’s all-star team.