Construction is underway on a retro-style boutique motel in the village of Colchester.

A ground breaking ceremony on Tuesday along County Road 50 near Colchester Harbour ushered in what’s expected to be an eight month project.

“This is something that's needed in the area,” said Essex Mayor Richard Meloche.

Meloche was joined by several other municipal dignitaries to kick off the $5.5 million project.

“We know that this is something that the tourism industry has been asking for in this area,” Meloche said. “We've got 10 wineries now in the Town of Essex. Out of the 10 wineries, we've got seven that are relatively within a few kilometers of this of this site.”

Meloche joins others who say there is a lack of accommodations in Essex County to compliment the region’s growing wine tourism industry.

“It's not a chain motel. It's somebody that knows small town and they're willing to work with the individuals that live close by to try and make their lives as uninterrupted as possible,” he said.

Plans call for a two-storey, 28-room motel to be built by the owners of the Grove Hotel in Kingsville.

“They’re in the class amongst themselves,” said Kingsville Mayor Nelson Santos. “Seeing this come online is an asset that we can celebrate as a county and as a region.” 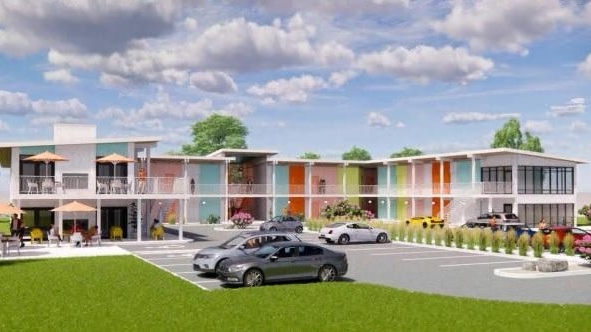 Plans for a new retro-style boutique hotel in Colchester, Ont. on Tuesday, May 10, 2022. (Chris Campbell/CTV Windsor)

“We spent 40 years trying to expand our tourism industry here in the Town of Essex,” he said. “It's our second largest industry and suddenly just in the last couple of years it's become red hot.”

Vander Doelen admits not everyone in the community was on board, but suggests progress is necessary.

“If you want to keep taxes down you have to have some new development to help pay for the extra cost of government and government is very expensive and it's going up.” Vander Doelen told CTV News.

“We've got, we believe, hundreds of rental cottages, short term rentals and Airbnb, but we don't have a hotel. It's crazy. How can a great hotspot like this with wineries and bike paths, how can we not have a hotel? We have to have one, so we're delighted.”

Councillor Sherry Bondy believes having regulated lodging addresses some concern locals have about short-term rentals that have been brought to the town’s attention in the past, noting this could bring a cultural shift to the quaint community.

“I think that having a motel or a hotel is going to alleviate some of the concerns that the community has about unsupervised residents and stays in the town,” Bondy explained. “So this is great because it's licensed, it's regulated, and it's watched. So I'm thrilled. I think the majority of the community is thrilled, you know change is a little bit hard.”

“The Town of Essex actually and Colchester have an improvement plan where it's been identified the need for professionally managed accommodations,” Flynn said.

He said the team hopes to finish construction by early 2023, with the goal of booking guests by next spring.

“We hope to be that catalyst to bring other businesses to the area, support the local wineries and all of business,” Flynn said. “Our friends from Michigan, Ohio, and of course the exposure to the GTA market, we’re a short three and a half hour drive from Toronto so people can come and explore the North Shores of wonderful Lake Erie.” 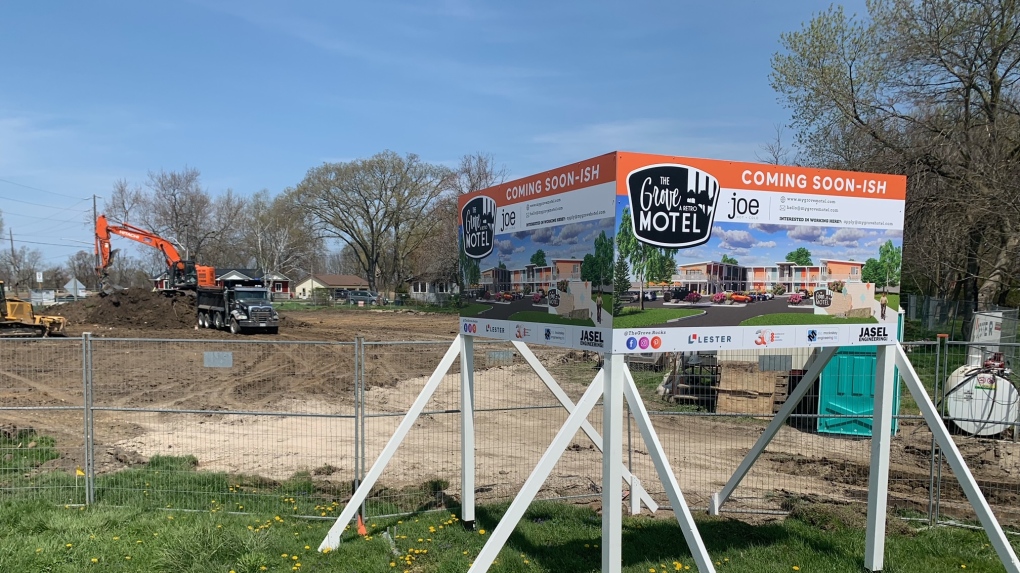 A ground breaking ceremony was held to mark the start of construction on a retro-style boutique hotel in Colchester, Ont. on Tuesday, May 10, 2022. (Chris Campbell/CTV Windsor)