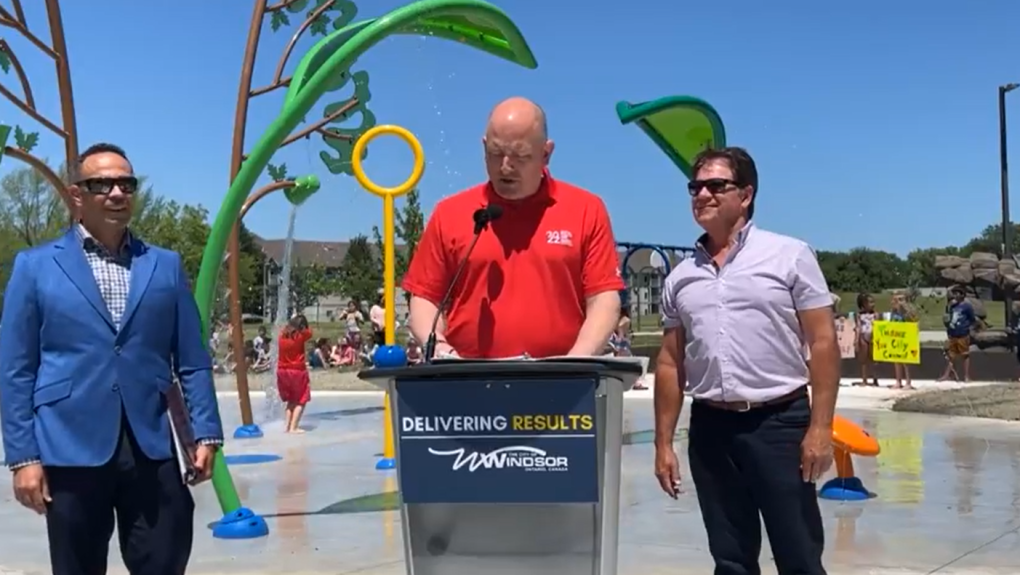 A new splash pad was unveiled at Fontainebleau Park in Windsor, Ont. on Friday, June 17, 2022. (Source: Screenshot from a City of Windsor livestream)

The City of Windsor officially opened its newly installed splash pad at Fontainebleu Park to help offer relief from the heat during the summer months.

Windsor Mayor Drew Dilkens and Ward 8 Coun. Gary Kaschak were on site for the unveiling Friday.

“I’m very happy for the Ward 8 community to enjoy this much-needed splash pad. A terrific improvement to the parks system for our residents, and I look forward to seeing lots of smiling faces this summer,” Kaschak said in a news release.

Fountainebleau Park is equipped with a large outdoor-themed accessible playground, soccer field, toboggan hill, trails and a bocce court, now a splash pad has been added for park-goers to enjoy.

The City of Windsor’s Capital Budget has allocated $1.7 billion for public infrastructure renewal over the next 10 years. The city says in 2022, $26 million is being invested in Parks and Recreation infrastructure to improve parks and trails across the city.

“We are always looking for ways to re-activate existing spaces, and this installment is just the latest of our local parks improvements that will be completed this summer,” Dilkens said. “City council has invested $26 million in Parks and Recreation throughout the city to provide residents with the quality outdoor facilities they deserve. We’re building playgrounds and carving new trails to deliver results that will continue to help build our city up.”

The City says Coun. Kaschak made a significant contribution of ward funds to bring the $420,000 splash pad to Fontainebleu Park. The splash pad features an array of sprinklers, a playground and benches.

The City of Windsor operated 10 splash pads around the city that are open from 8 a.m. to 8 p.m. seven days a week depending on the weather from May to October.