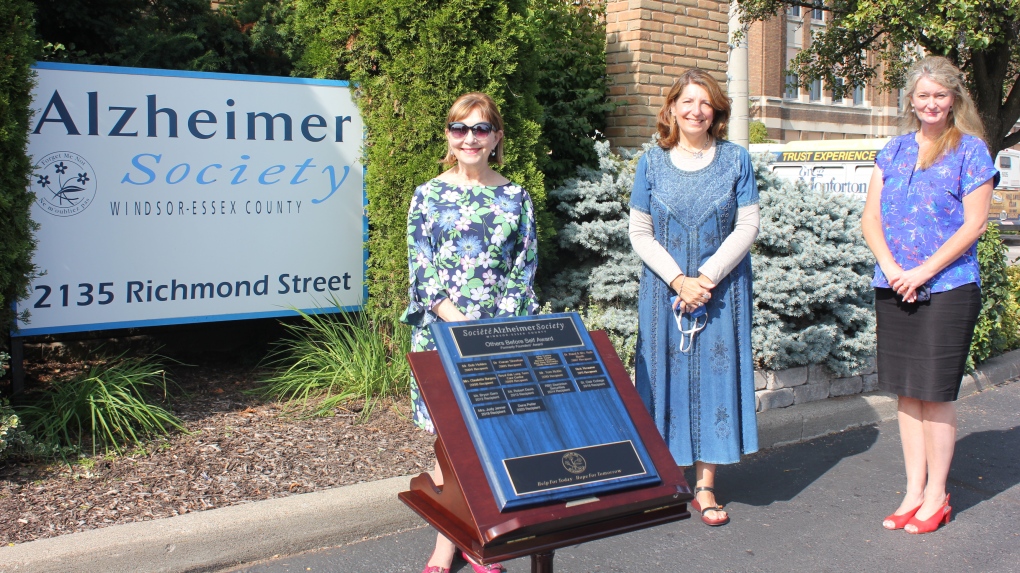 Karen Hall and Sally Bennett Olczak present the Others Before Self Award to Dena Peifer on World Alzheimer's Day in Windsor, Ont. on Monday, Sept. 21 2020. (courtesy Alzheimer Society of Windsor and Essex County)

WINDSOR, ONT. -- A local care partner was presented an award Monday in recognition of those who care for someone affected by the disease in honour of World Alzheimer’s Day.

The Others Before Self Award, one of the Alzheimer Society of Windsor and Essex County’s two biannual Alzheimer’s awards was presented to Dena Peifer, care partner to her brother and advocate to the cause.

"The Society couldn’t be more delighted with the Board’s selection of this year’s recipient,” Sally Bennett Olczak, CEO at the Alzheimer Society of Windsor and Essex County said in a news release. “Dena personifies all of the nomination criteria in exemplary ways.”

The award was established to honour and recognize individuals who have demonstrated leadership in advancing the cause and improving the quality of life of someone affected by Alzheimer’s disease and related dementias through care, advocacy and education.

The Alzheimer Society of Windsor and Essex County says the prevalence of dementia is steadily increasing, affecting more people across Canada each year. However, stigma continues to be a large concern.

According to Alzheimer Society research, one in four Canadians said they would be embarrassed or ashamed f they had dementia, and nearly half said they would not want others to know if they were diagnosed, a news release stated.

For World Alzheimer Day, societies are asking people to show their support and raise awareness about the stigma associated with dementia by wearing blue.

“World Alzheimer’s Day is a great opportunity for us to recognize and support those in our families and communities who are affected by dementia,” Bennett Olczak said. “A lot of people still don’t really understand what dementia is or how it affects those living with the disease.”