The world’s first vaccine against American foulbrood has been approved for use by the United States Department of Agriculture (USDA).

Dalan Animal Health, a biotech company based in Athens, Georgia has received a two-year, conditional licence to distribute the vaccine to commercial beekeepers.

“This vaccine sounds like it could be really beneficial to the industry,” says Tom Congdon, third generation owner and operator of Sun Parlour Honey, based in Cottam, Ont.

“These new treatments that they're coming up with show good promise,” says Congdon. “We need to see the field studies this summer to know just how effective it's going to be but it's looking promising.”

Congdon says American foulbrood has been in North America for decades, as far back as when his grandfather started the business in 1916.

“American foulbrood is very difficult to manage other than destruction of the colony and starting fresh,” says Congdon.

According to the Ontario Ministry of Agriculture, Food and Rural Affairs, American foulbrood is caused by a bacteria called paenibacillus larvae and it only attacks developing bee larvae, not adults.

The ministry notes, “this disease is highly contagious, will contaminate beekeeping equipment, bees and honey, and will weaken, and in most cases, kill a honey bee colony.” 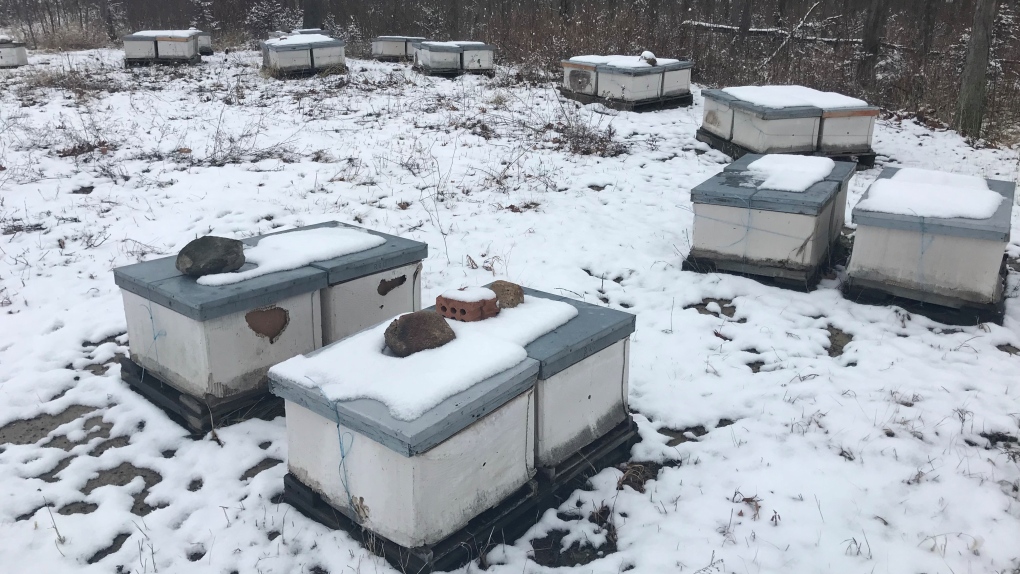 Bee colonies at Sun Parlour Honey in Cottam, Ont. on Monday, Jan. 23, 2023. (Michelle Maluske/CTV News Windsor)Congdon says the only treatment is an antibiotic which he believes isn’t effective once the bees are infected.

Congdon says beekeepers in Ontario are managing the disease “quite well” because they are continually checking their colonies, looking for any signs of sickness.

But he notes a more “virulent” form of American foulbrood has been found in Western Canada.

“It's only a matter of time before it migrates to our area. So if we can have a vaccine that's going to give more protection and that in the long run would be safer for the bees,” says Congdon.

According to the Dalan website, the American foulbrood vaccine contains cells from paenibacillus larvae.

It is then put into something called ‘queen candy’ which is a sugary substance with a gum-like consistency.

The worker bees eat it as a food source and pass it onto the queen, who in turn passes the immunity onto the larvae she hatches.

According to Dalan, the vaccine is “non-GMO and can be used in organic agriculture.”

If it is ever approved for use in Canada, Congdon would consider using it at his farm as a preventative measure.

“It'll be something that you use ahead of time,” says Congdon. “If you have a colony that's infected with American foulbrood, I think you'll still want to probably destroy (the colony) and start fresh because those spores can spread everywhere so quickly and they can get into all of our equipment.”

CTV News has reached out to Health Canada and the Pest Management Regulatory Agency and the Canadian Food Inspection Agency for comment.

This is a developing story, more details to come.