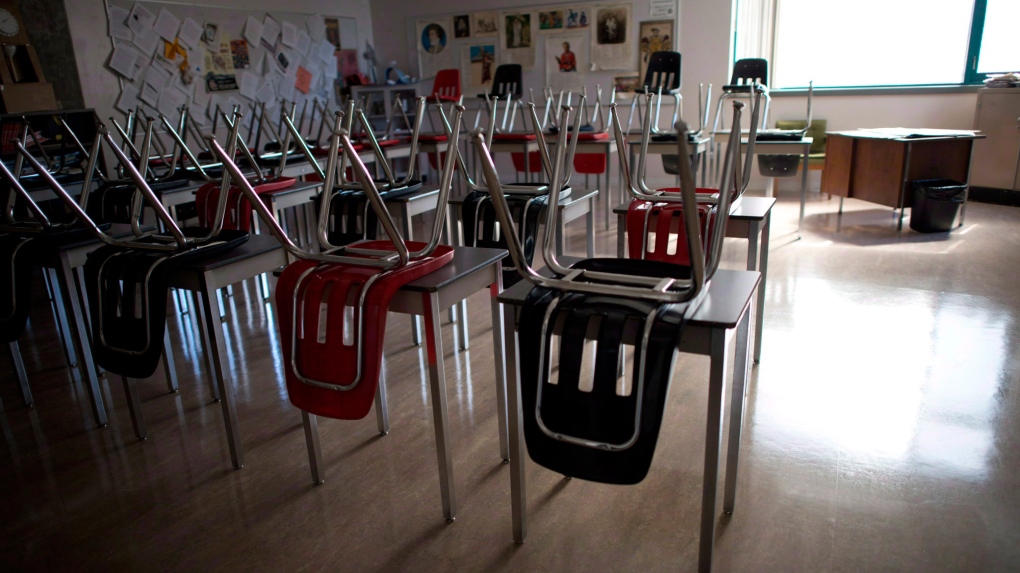 A vacant teachers desk is pictured at the front of a empty classroom is pictured at McGee Secondary school in Vancouver on Sept. 5, 2014. THE CANADIAN PRESS/Jonathan Hayward

TORONTO -- There will be approximately 10,000 fewer teachers in Ontario schools over the next five years because of the government's hike in class sizes, according to the province's fiscal watchdog.

In a report released Thursday, Financial Accountability Officer Peter Weltman estimates there will be 9,060 fewer high school teachers and 994 fewer elementary teachers by the 2023-24 school year.

The changes will save the province about $2.8 billion over the same period and a further billion dollars annually thereafter, the report states.

"The class sizes have been reduced so those teacher jobs will no longer be required," Weltman said. "It's not a cut, it's a cost avoidance."

The Progressive Conservative government has said the changes were necessary to fight a $7.4-billion deficit and will result in 3,475 fewer teachers in the system over four years.

The FAO said the government arrived at that estimate by looking at the actual number of teaching jobs in 2018-2019 that won't exist four years from now. The financial watchdog, however, looked at the number of teachers that would have been required had class sizes not changed.

"We are always looking at changes against status quo," he said. "That's where we derived our 10,000 number from. That was based on a projection of student enrolment, increased population ... (and) how many teachers would that require in a 22-student class size versus a 28-student class size."

Earlier this year, the government ordered school boards to start increasing class sizes, moving to an average of 28 from 22 in high schools over four years. Class sizes for grades 4 to 8 will increase by one student per classroom over the same period, to 24 from 23.

Facing a backlash over the impact the changes would have on teacher jobs, the government created a $1.6 billion fund for school boards to ensure no teachers were laid off as a result of its plan.

In its report Thursday, the FAO estimates that the government has provided enough funding to ensure the class size targets will be met without teacher layoffs.

"The officer confirmed what we have been saying all along: no teacher will lose their job as a result of our class size policy," he said in a statement.

NDP education critic Marit Stiles said the changes mean the province is trying to balance its budget on the backs of students.

"This is really devastating news but it confirms what we've been afraid of ... a dramatic cut in the number of teachers in classrooms and the opportunities for our students," she said.

"Although the premier campaigned as if he would simply trim the fat, his cuts are digging into the bone," Schreiner said in a statement. "This is a direct threat to the quality of education in Ontario."

This report by The Canadian Press was first published Sept. 26, 2019.