“Keeping the pools open at Adie Knox (recreation complex) has been an ongoing, 11-year battle,” resident Caroline Taylor stated. “Yet at every turn council has tried to close this well-used, easily accessible, beloved community amenity.”

The matter was back before city council, because Windsor was unsuccessful in securing a federal funding grant to match the city’s $20 million investment in the facility.

The application was through a green initiative fund, to help municipalities pay to build more environmentally friendly buildings.

According to city administration, Windsor’s application was denied because it didn’t promise the improvements would come with zero carbon emissions.

So council was tasked with deciding not only how to proceed with a rebuild to Adie Knox Complex, but also, how to pay for it.

Ten residents begged council to reconsider their plan to close the pool, including Linda MacKenzie with the Friends of Adie Knox.

“I realize the city and university (of Windsor) have signed a legally binding agreement, but perhaps that should be revisited,” MacKenzie told council Monday.

In June 2021, when council unveiled their plan for Adie Knox (which did not include a pool), it also announced an agreement to move west end aquatic services over to the new Toldo Lancer Centre at the University of Windsor.

The city agreed to give the university $3 million in capital spending to build the Lancer pool.

Then, every year, UWindsor gets $200,000 from the city for operational costs to offer the same level of aquatics programming that was at Adie Knox, and to provide residents with free parking and waiving of membership fees at the Lancer Centre.

The Toldo Lancer Centre opened with a soft opening earlier this summer.

“We have been in contact with them (Lancer Centre) and they intend to offer full programming beginning later this summer,” Windsor’s commissioner of community services, Ray Mansour told council Monday. 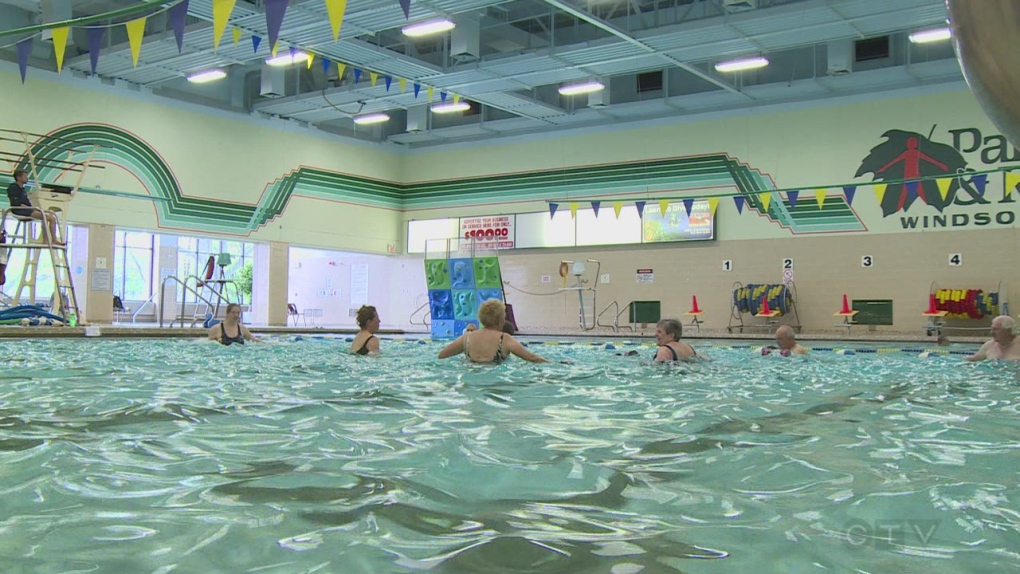 Patrons take a dip at Adie Knox pool in Windsor, Ont. on Monday, July 7, 2014. (CTV Windsor)For now, Mansour says the community can sign-up for Learn to Swim lessons at the Lancer Centre.

“The (pool) temperature will be the 86, 87 degrees that we used to have at Adie Knox,” Mansour explained. “They (Lancer Centre) will have free parking, parking tickets will be validated and the programming and the rates will be honoured like we have (at) every other city facility.”

Mansour also said a community orientation session is being planned for Adie Knox pool users to try the Lancer Centre.

City officials say the water is still in at Adie Knox and will be available as demand for aquatics increases and as lifeguarding staff is hired or re-certified.

However, as of Tuesday, Adie Knox does not have any aquatics offerings through the city recreation website.

“And so now we're at a position where we are moving forward on what was approved in 2021,” Coun. Fabio Costante said Monday.

Costante tabled a motion for the city to move forward with the reimagining of Adie Knox, without federal funding, by spending $29 million in Windsor taxpayer money on the project.

This is what it will pay for:

The extra $9 million was moved out of the funding set aside to pay for improvements to University Avenue West.

Costante acknowledged they need to spend on the busy street, but noted the investments to Adie Knox are “multi-generational.”

Council voted to push the University Avenue work to the next round of budget deliberations in 2023.

“Whenever there’s these types of decisions, they're never going to be perfect. They’re never going to satisfy everybody. But does this move us forward as a community as a whole? I believe it does,” Costante told residents Monday.

The mysterious woman who allegedly lured dozens of migrants on Florida Gov. Ron DeSantis' flights to Martha's Vineyard from San Antonio has been identified by several media outlets as a former combat medic and U.S. Army counterintelligence agent living in Tampa.

Appearing before the House of Commons Finance Committee on Monday, Deputy Prime Minister and Finance Minister Chrystia Freeland defended the government's response to Canadians' affordability concerns as 'focused' and fiscally responsible. With the passage of the GST rebate-boosting bill through the House all but a foregone conclusion, Freeland was peppered with questions from opposition MPs on a range of topics, including inflation.