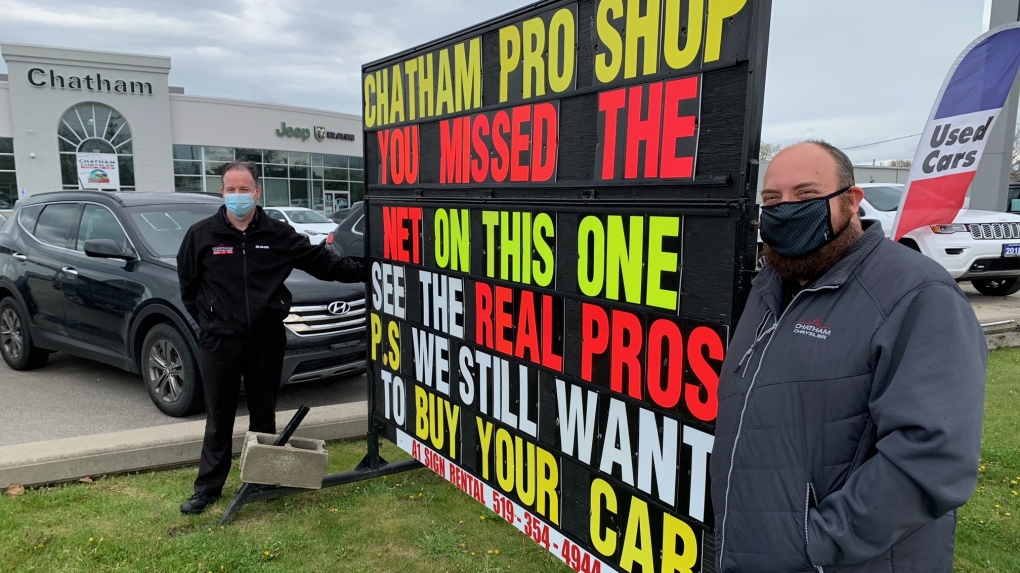 WINDSOR, ONT. -- The first friendly shots have been fired and already dozens of Chatham-Kent businesses have signed up for a sign-war.

The new pandemic trend is sweeping across Canada and The United States, first gaining traction in Christiansburg, Virginia.

“When I saw the one from the states, I said okay,” Chatham Pro Shop’s Darryl Lucio says. “We’ve got to get this going in Chatham!”

Lucio says he was among the first in the Maple City to take part. He says he concocted several punny signs and encouraged several businesses to join in the fun.

Since the first sign went about two weeks ago, roughly three dozen more businesses across Chatham-Kent have joined in.

“I think within the first 20 minutes of the sign being up I had probably 20 or 30 text messages of people being like what the heck are you guys doing,” says Bud Bank cannabis shop owner Don Tetreault Jr.

He says his shop is on board noting nothing but positive feedback has come from customers in person, and online.

“The community needs something to laugh about right now,” Tetreault says. “Everybody is bored, sad, stressed out or whatever, to be able to drive around when you’re going to work or doing whatever and you see something funny, it lifts people’s day up and I think people really enjoy.”