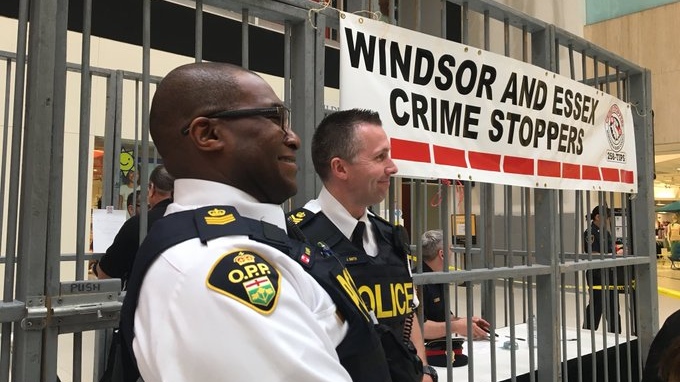 The longest running fundraiser in Crime Stoppers history made a return to Windsor on Thursday.

The ‘Bail or Jail’ event works as a mock trial of participants and helped to kick-off Police Week at Windsor’s Devonshire Mall.

Those taking part face sentencing from a fake judge before being locked up and having to collect donations to make bail.

Constable Amanda Allen is a police coordinator with the Windsor and Essex County Crime Stoppers.

Allen says in addition to being the oldest, it’s also one of the most important fundraisers for the non-profit group.

Thursday’s event saw Windsor resident Joe McParland serve as the judge while 13 participants were lined up for a fake trial.

Chief for a Day

Anya Oullette, a Grade 6 student at Glenwood Public School, was named ‘Chief for a Day’ as part of a program targeting young people.

Constable Bianca Sims says the program is an educational opportunity for young people like Ouellette.

“For them to see, number one, what police officers do,” said Cst. Sims. “That we are not just here to solve crimes and put away the bad guy, but we’re here to serve the community.”

The 11-year-old was selected after writing a letter to the service advocating for a new park in Windsor in honour of her late grade 4 teacher.

“We should help out more around our environment and our community and I wanted to help raise money for my grade 4 teacher’s playground that she wanted because she had cancer,” said Ouellette.

According to Ouellette, so far roughly $2,000 has been raised towards creating a new park.

#PoliceWeekON 2019 Chief for the Day Anya is now holding a press conference. I may be out of a job! pic.twitter.com/HBfvLC7Zrj