As bars and restaurants open up their patios, Open Air Weekends return to Amherstburg

Organizers had planned to kick off the season on the Victoria Day long weekend, however that plan was delayed due to the extension of the province's stay-at-home order.

"It’s open streets Amherstburg," says the Town of Amherstburg mayor, Aldo Dicarlo. "We’ve been waiting for step one to begin so we can open our streets," says Dicarlo.

While the province moved into Step One of its Roadmap to Reopen on Friday, many indoor activities are still restricted.

This is the second year the town is closing downtown streets on the weekends throughout the summer to allow for extended patios and sidewalk sales.

"Everybody was just very happy to be out and about — sitting at tables, eating at restaurants again and supporting local business," says Dicarlo. 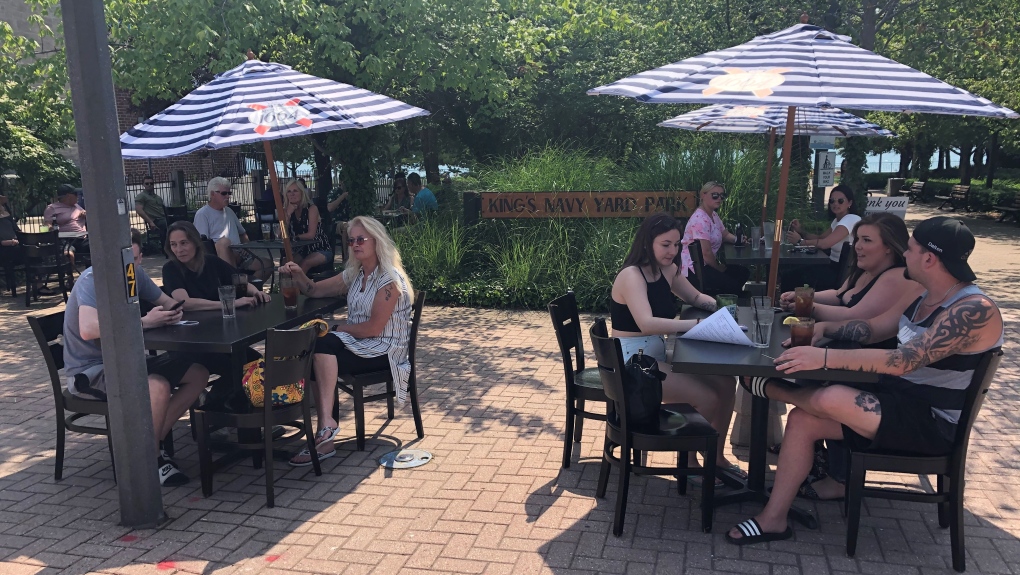 "The vibe out here last night was fantastic. There was music playing. All the venues along Dalhousie Street were completely full. The only downfall was people didn’t want to leave. They wanted to stay all night," says Johnston.

"I think most people are suffering a lot of isolation from the lockdowns and we fully expect they’ll be out here in droves maybe a little too much. It’s always our concern with an event like this. But it’s a perfect opportunity to get out, start experiencing some normalcy in life and do it a safe way," says Dicarlo.

"I think it’s a wonderful idea and it gets people out. And when you can’t eat in a restaurant yet, it’s nice to be able to eat outside. And when they have the lovely white table clothes on, It’s beautiful," says Arnold.

The event started last summer as part of the town's COVID-19 recovery and revitalization plan.

"During budget deliberations this year, Open Air was on there and we approved $50000 for the season," says Dicarlo.

"I’m so happy town council and people made the initiative to help us with this. It’s going to help us make up for a lot of lost time being closed and having such low sales and low work. Now everyone is going to be back to work, making money and happy. It’s really exciting for sure," says Johnston.

Whether it's dining outdoors, street shopping or music in the park, Open Air weekends are expected to wrap up at the end of September.

"Many places should do this. It’s perfect for a small town," says Arnold.

"I might be biased but downtown Amherstburg is a pretty great place to be. And with the streets closed and the freedom to walk around, it’s hard not to be here," says Dicarlo.

Families Minister Karina Gould is expected to introduce legislation today to strengthen child care in Canada, which is likely to include an effort to secure a long-term role for Ottawa in the new national daycare system.

More children are being admitted to hospitals across Canada amid a flu season crush exacerbated by a stretched health-care system and lack of vaccination, says an infectious disease expert.