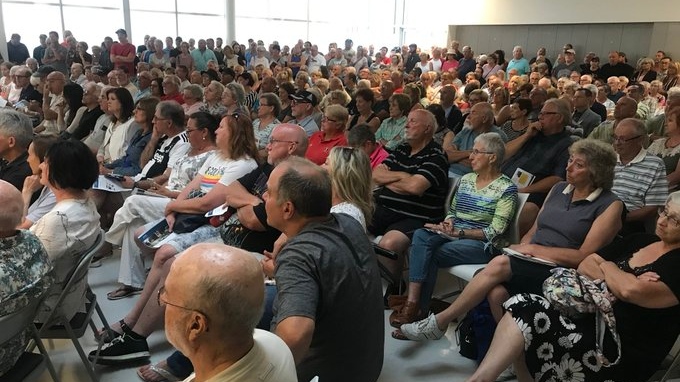 Hundreds of Lakeshore and Tecumseh residents pack the Atlas Tube Centre in Lakeshore to learn about the cause and impacts of high lake levels on the region on Aug. 12, 2019. (Rich Garton / CTV Windsor)

It was an absolutely packed house at the Atlas Tube Centre Monday night as residents from Tecumseh and Lakeshore showed up in spades to learn more about the cause of high water levels in Windsor-Essex and the impact they could have on homeowners.

"People are becoming more and more aware of the advisories that we have been issuing,” Byrne noted after the meeting. “People are genuinely concerned and in some cases afraid of what we could be looking at in November."

Byrne told residents one of the leading causes of high lake levels on Lakes Erie and St. Clair is the outflow from Lake Superior which is why he predicts water levels could rise four more inches by the winter.

The conservation authority recently extended its flood watch for the region until the end of September and will monitor lake levels after that.

Byrne says there’s very little that can be done this year to stop the rising levels. He says individual property owners can take some measures, such as sandbagging – but it won’t stop flood waters during windy and rainy conditions.

Lakeshore Mayor Tom Bain was also in attendance and says he's happy about the strong turn-out, which looked to be roughly 300 to 400 people. Because of the number of people who came out, the town promised to speak with individuals in the days after the meeting.

Tuesday's session is in Windsor at the WFCU Centre's Collavino Hall from 6:30 to 8:00 p.m.