WINDSOR, ONT. -- Urbain Vanier, 63, and his wife Julia, of Windsor, are now in quarantine in a Trenton, Ont. hotel after having their cruise cut short.

“Nineteen crew members and two passengers had [COVID-19],” Vanier says. “People were no longer allowed to touch anything. All the food was served and then after the CDC (Centers for Disease Control) got on board they asked everybody to remain in their rooms.”

This was all happening with just one day left in their Hawaiian cruise onboard the Grand Princess and instead of returning to San Francisco, Vanier says the ship sailed for Oakland, CA.

“We held out on the coast of California for two, three days,” Vanier says as they were all told it would take one to three days to get all passengers off the ship.

The Vaniers had planned to stay on the ship until the end, because they weren’t worried, scared or sick.

But then crew members came and told them they had five minutes to get their things and get off the ship. 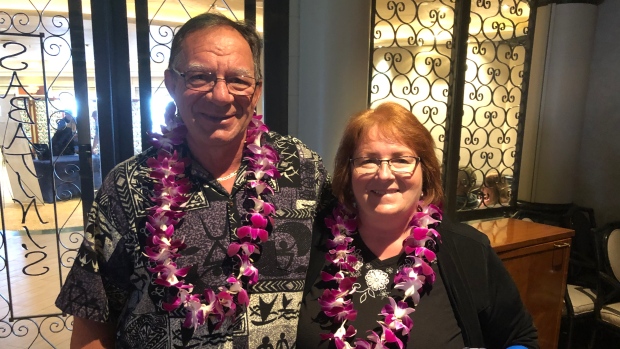 “It was a win-win,” Vanier says, because they were among the first Canadians to be flown home.

The Vaniers were on an 11 p.m. flight on Monday out of Oakland to Canadian Forces Base (CFB) Trenton, in Eastern Ontario.

“Someone, one of the other passengers started into (singing) O Canada,” Vanier says, as the aircraft was touching down at the military base.

“The Red Cross and everybody in the hangar, you know, helping us, get our luggage together, getting our luggage out to this hotel and up into our rooms, and to help us settle in…just an amazing job,” Vanier adds. “Like a fine Swiss watch, it just worked perfectly.”

The Vaniers are now settled into the Hercules Hotel, in the town of Trenton, Ont., where they will live for the next 14 days in isolation.

“If any of us have it, well, you know, stop it here, it's the right protocol to do.”

Vanier and his wife do not feel ill and are actually looking forward to resting and getting a chance to “hang out” together.

“We had been going to every island and trying to keep up with all the activities on the ship and so we’re going to get a good chance to rest and recoup.”

Vanier says the cruise line, Princess Cruises, “has covered everything 100 per cent,” and they credit the staff on board for staying calm and operating as efficiently as possible given the circumstances.

On Monday, 237 Canadians were among the 3,500 passengers on board Grand Princess when it was forced to make an emergency detour to Oakland because of COVID-19.