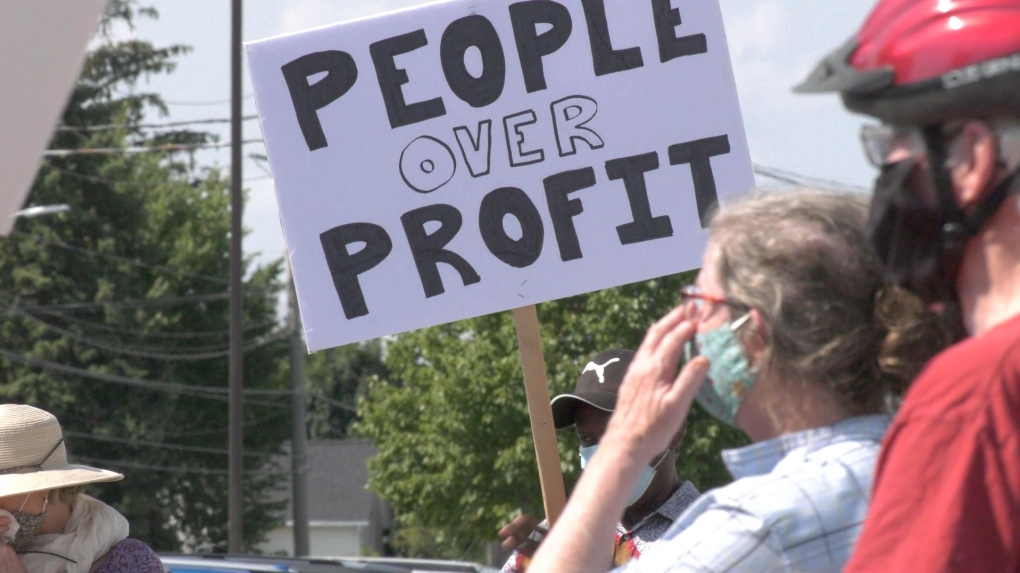 Advocates rally outside of the Immigration, Refugees and Citizenship Canada office at 1250 Walker Road in Windsor in support of greater workplace rights for migrant workers and international students on Sunday, August 23, 2020. (Ricardo Veneza / CTV Windsor)

WINDSOR, ONT. -- A rally in Windsor joined the chorus across the country in calling for migrant workers and foreign students to be given a pathway to citizenship as a means to greater workplace protections.

On Sunday, a group of roughly 50 gathered outside of the Immigration, Refugees and Citizenship Canada office in the city’s Walkerville neighbourhood to call for migrant workers and international students to be granted status upon arriving in Canada.

"I think status is the best way to achieve an equalization of rights," said Tracey Ramsey, the co-chair of the Windsor Health Coalition and former MP for Essex. "Right now what we have is a patchwork of systems federally and provincially that dictate the lives of people who are here working and at school from other countries." 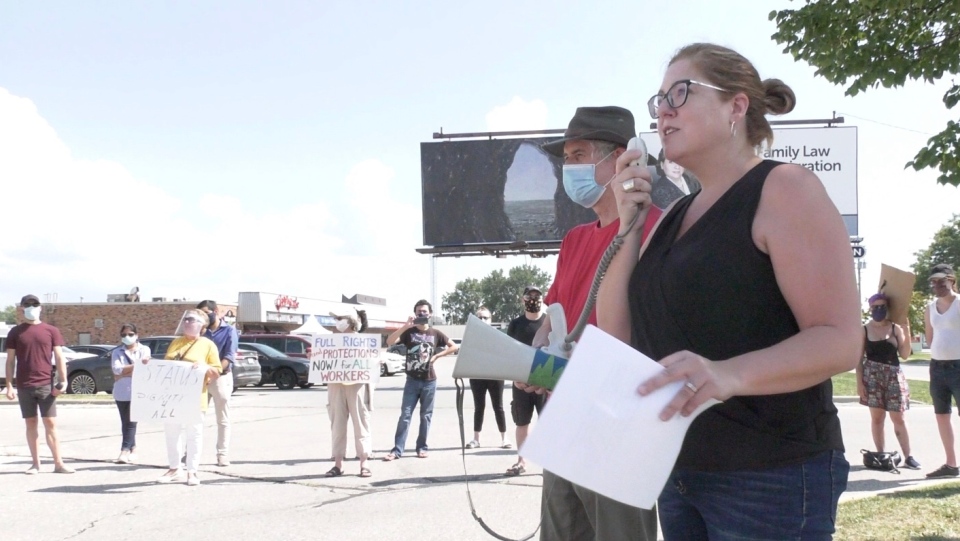 Ramsey says the action today was part of country-wide rallies taking part outside of government offices and constituency offices of Members of Parliament.

Advocates pointed to the deaths of two migrant workers locally and three in Ontario due to COVID-19 as evidence temporary foreign workers face precarious conditions while working in Canada.

The latest figures from the Windsor-Essex County Health Unit show 1,169 cases of the novel coronavirus have been confirmed in the agri-farm sector in Essex County of 2,466 total cases in the region.

Ramsey says the pandemic has only highlighted a problem that has long existed and its need for a remedy.

"When you have people who are here under these, you know, kind of patchwork different programs, [workers and students] have diminished rights so, they aren’t able to stand up for themselves or exert their rights and they’re very vulnerable in that situation," said Ramsey. "The only way for them to have the same rights as workers, as students, that you and I have, is to have citizenship."

The Ontario Greenhouse Vegetable Growers (OGVG), which represents many employers of temporary foreign workers, has stated its public support for the creation of an independent body to receive and address workplace complaints from agri-food employees.

In a news release issued on August 17, the OGVG says its members are “committed to their workers, their families and their communities” and “remains committed to enhancing a full suite of regulatory tools, support services and other workplace protections for agri-food employees.”

Between 8,000 and 10,000 migrant workers are brought into Canada annually through the Temporary Foreign Worker Program, largely to help harvest crop.