WINDSOR, Ont. -- The Windsor Spitfires have done it again.

The Spitfires are Memorial Cup champions for the third time in franchise history after beating the Erie Otters 4-3 on Sunday for the Canadian Hockey League championship.

Windsor also won in 2009 and 2010. The Spitfires have now won 12 straight tournament games, tying the Kamloops Blazers for longest winning-streak at this event.

Amherstburg native Michael DiPietro made 32 saves for the win, and was named the top goaltender at the Memorial Cup.

“It’s so special winning at home, especially with this group of guys,” said DiPietro during post-game celebrations. “The crowd was so loud and played a big part in this, threw the momentum in our favour. They’re part of this too and helped us bring it home.”

Strome was named the tournament MVP.

The home crowd was in it even before puck drop at the WFCU Centre, with 'Go Spits Go' chants starting once the anthems finished.

Both goalies had to be sharp early.

Alex DeBrincat, CHL player of the year, had Erie's first scoring chance but DiPietro took it in his chest with no rebound.

Bracco went back down the ice two shifts later and chose to keep on a 2-on-1 rush, with Timpano getting an arm on it. Bracco then found Knott in alone on Timpano only for the Erie netminder to shut him down with a pad save.

Bracco stayed at it and finally opened the scoring on a Windsor power play, picking the puck out of a scrum in front of the Erie net and sliding it through Timpano with 3:53 to go.

But Strome responded only 49 seconds later, beating DiPietro blocker side.

Strome put a shot on net that went in off Foegele's skate and past DiPetro while on the power play at 5:35 of the second.

A video review was needed to determine if a distinct kicking motion was used, but the goal stood and Erie had its first lead of the game despite it appearing to be kicked in by the Otters forward.

Erie didn't hold its lead for long, though, as Stanley tied the game 52 seconds later with a point shot that Timpano couldn't see at 6:27.

Fergus put a point shot on net that hit a Windsor stick and past DiPietro for a 3-2 advantage with 7:14 remaining in the second.

The Otters were outshooting the Spitfires 10-1 when Windsor went on the power play at 13:24. And the home team took advantage of its opportunity as Gabriel Vilardi found Knott at the side of the net to make it 3-3.

Shots were 24-17 Otters after 40 minutes, with six coming from DeBrincat alone.

Bracco was still a factor for Windsor in the third as he found a streaking Luchuk for a 4-3 lead 5:07 into the period.

Erie pushed for the equalizer and controlled the puck for the majority of the third. Strome hit the post with less than two minutes remaining, but couldn't crack DiPietro.

The Spitfires title marks the third straight season an OHL team has captured the national prize representing the regional league’s longest winning-streak in the modern era.

(with files from the Canadian Press) 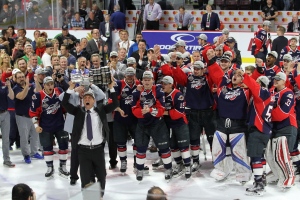