A Windsor, Ont. man made an appearance in court after being charged with participating in or contributing to the activity of a terrorist group, according to the RCMP.

The Atomwaffen Division was founded in the U.S. in 2013 and was added to Canada’s Criminal Code list of terrorist entities in February 2021, opening up people who are affiliated with the group to criminal sanctions.

"The success of this investigation is directly attributable to the strength of our policing and intelligence partnerships. Along with our partners, the Windsor Police Service and OPP PATS [Provincial Anti-Terrorism Section],” said Inspector Cheryl Brunet-Smith of the Integrated National Security Enforcement Team.

Seth Bertrand, 19, is charged with “participating in or contributing to, directly or indirectly, any activity of a terrorist group for the purpose of enhancing the ability of any terrorist group to facilitate or carry out a terrorist activity, contrary to Section 83.18(1) of the Criminal Code.”

Bertrand was previously charged by Windsor police with mischief after allegedly vandalizing the WE Trans Support Community Centre on three occasions.

He was also arrested following a series of vandalism incidents in a Walkerville neighbourhood which the victims believed were targeted attacks.

The allegations for those charges have not yet been proven in court, but one the owners of that home told CTV News he has mixed feelings about the most recent charges laid against Bertrand.

During one of the incidents, a note with what appeared to have “Atomwaffen knows where you are" written on it, was left at the home. 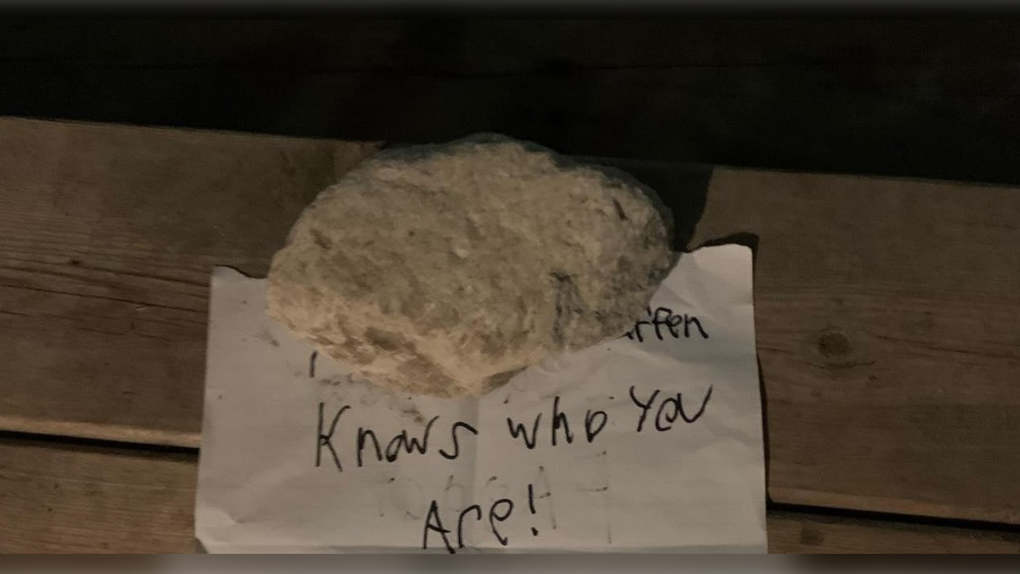 A note was left at Aaron Bergeron's residence in Windsor, Ont. (Source: AM800)

Bergeron said the note led the couple to believe whoever was committing the vandalism was part of a bigger group.

“I can't even think of what someone would have to go through to make them hate so much, that they would destroy strangers’ property because there's a pride flag on someone's house,” he said. “He didn't know who we were. He had no idea who me and my husband were. He had no idea who anybody who lived in this neighborhood. He just saw a pride flag and felt the need to cause as much destruction as possible over a series of colors.

Bergeron said he will continue to follow the story, and talk about his experience.

The allegations included in both sets of prior charges are still to be tested in court.

Bertrand will make another court appearance related to the most recent charges, and will be held in custody at least through the weekend.

- With files from CTV News' Sanjay Maru and Rachel Aiello.