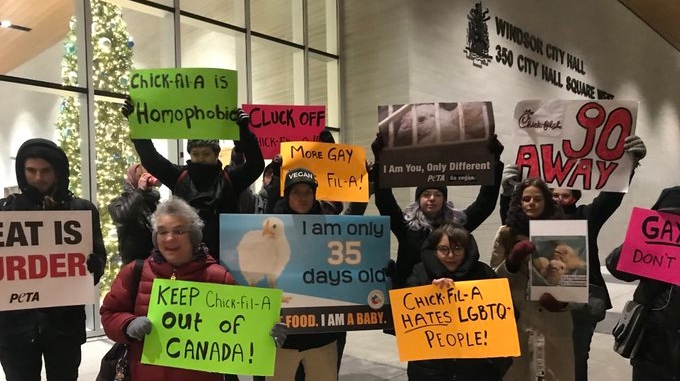 A group of people protest a proposed Chick-Fil-A out front of Windsor City Hall on Dec. 2, 2019 (Rich Garton / CTV Windsor)

WINDSOR -- A protest took place out front of City Hall Monday night -- but it didn't stop plans for a Chick-Fil-A restaurant in Windsor.

The fast-food chain is proposing a restaurant at 3060 Howard Ave., near the Devonshire Mall.

A Facebook group called Keep Chick-Fil-A out of Windsor hosted the protest right before the council meeting to “tell city council to vote no.”

Chick-fil-A has garnered a controversial reputation in recent years due to CEO Dan Cathy’s stance on the LGBTQ community.

Cathy has previously said he believes in the “biblical definition of a family unit” and has donated millions to charities with a history of discrimination against LGBTQ groups.

As a result, the chain’s grand opening on Sept. 6 at Yonge and Bloor streets in Toronto was met by dozens of protesters who shamed customers for purchasing food from the store.

But all that happened at Windsor council on Monday was a site-plan approval -- an item on the communications agenda, which was unanimously passed without a word of debate.

Windsor Mayor Drew Dilkens says this will likely pave the way for the restaurant to move foward.

“Whether I like the owner of Chick-Fil-A and what he stands for or doesn’t stand for, that cannot play any role in the decision that we make,” says Dilkens.

He says protesters are within their right to oppose the chain from setting up shop, but denying approvals on the grounds of corporate culture is not council's place and would likely lead to a successful appeal from the company.

“For people who are protesting who don’t like Chick-Fil-A or their corporate principles, don’t eat there," Dilkens says. "It’s quite simple. Don’t support them, don’t spend your money there and they’ll get the message quite clearly.”

Group member Jo Blum posted to Facebook after the meeting after a discussion with Coun. Kieran McKenzie, acknowledging council’s hands are tied -- but vows to be vocal moving forward.

“It is up to us as consumers to let Chick-Fil-A know they are not welcome in our community,” Blum writes. “This will be done by petitions, letters and protests. The admins of this group will be discussing our next steps and will inform you of them in the near future.”

“As for right now how you can help is by starting a conversation with your friends, family and coworkers of how you will not be supporting Chick-Fil-A when they come to Windsor and that they should boycott them too,” says Blum.