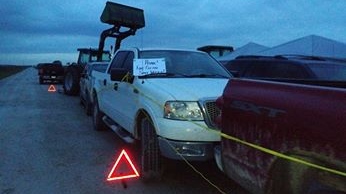 A group of Chatham-Kent farmers who've set up a blockade at the construction site of a wind-turbine in north Kent are being joined by other water advocates.

The farmer's group Water Wells First have now focused attention on the site at Bush Line and Highway 40 and have formed a chain of tractors.

About 50 people are at the site including the members of the council of Canadians.

Water Wells First wants sediments tested for possible heavy metals in area wells which they claim is being released from pile driving, needed to secure the footings of turbine towers.

The municipality has also recently asked the province for a moratorium on constriction until testing is complete.

The company in charge says it's been following a program set up by the province and a scientific expert found that construction and operation of the turbines will not cause harm to groundwater quality.