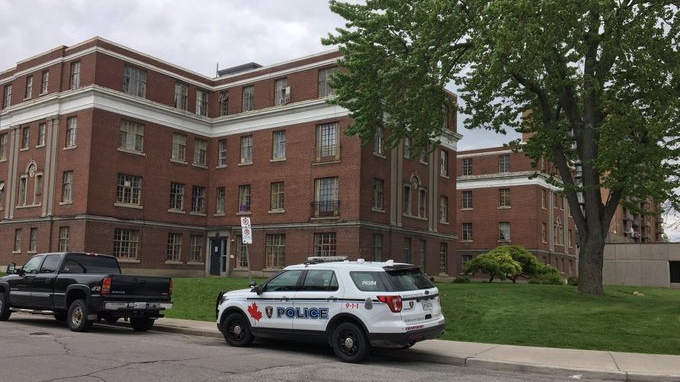 Windsor police investigate a stabbing at an apartment building located at 1616 Ouellette Avenue on May 20, 2019. (Ricardo Veneza / CTV Windsor)

Windsor police have issued a warrant for a man wanted in connection to a stabbing at an apartment on Ouellette Avenue.

Officers responded to an apartment unit at 1616 Ouellette Ave. for a report of a stabbing on Monday around 11:40 a.m.

Upon arrival, officers found a man suffering from a number of apparent stab wounds.

The victim was transported to hospital for treatment of non-life-threatening injuries.

The scene was contained and an investigation was launched.

Members of the Forensic Identification Unit attended and processed the scene.

Detectives from the Major Crimes Branch continued the active investigation.

Police determined that the victim and the suspect were known to one another.

Officers say while inside the apartment unit, an altercation took place during which the victim was stabbed by the suspect.

The suspect fled the scene on foot prior to police arrival.

Police say the suspect has been positively identified and an arrest warrant has been issued in his name.

Kyle Miles, 22, of fixed address, is wanted for aggravated assault.

Officers say it is possible that he is armed with a knife and do not approach him. Call 911 if he is spotted.

He is described as a white man, about 5'11", thin build, about 150 lbs, wavy dirty blonde hair, brown eyes and numerous body tattoos.