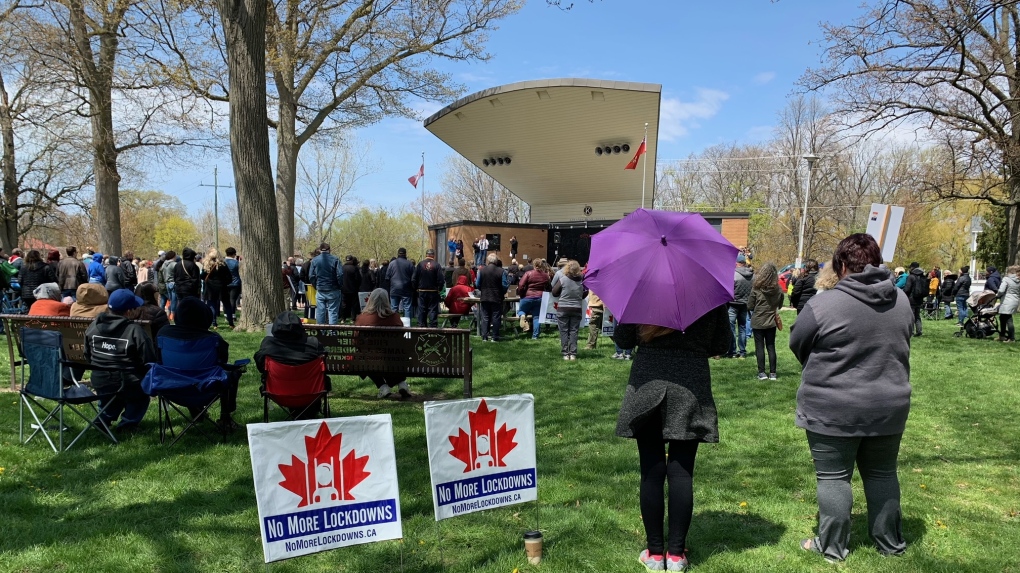 WINDSOR, ONT. -- A second charge has been laid following an anti-lockdown event in Chatham on April 26.

“People with enforcement have up to six months to lay a charge,” said Shropshire.

A group of about 300 mask-less demonstrators and frustrated Ontarians gathered in Tecumseh Park for a noon hour rally organized by the “No More Lockdowns Canada” group, which toured the region.

Those in attendance expressed frustration with the province’s stay-at-home orders, worried the measures had taken away rights and freedoms.

It was not the only recent charge under the Reopening Act as a 38-year-old Dresden man was charged Wednesday evening.

It followed a report to Chatham-Kent police of a gathering at the Old Colony Mennonite Church on Grove Mills Line in Dresden on May 2, despite a provincial order to remain closed.

“For those people choose to disregard there are charges and there have been,” added Shropshire.

Shropshire did not rule out stricter penalties for repeat offenders, as jail time or preventing people from entering premises.

“Fencing or locking doors, yes that could be considered,” he said.

Chatham-Kent’s public health officer Dr. David Colby said his employees at public health were getting an earful from some residents who have called to complain about the provincial measures.

“I ask people to be tolerant and have courtesy, and don’t call the health unit to express anger,” said Colby.

Colby noted his unit continues to make progress as Public Health had vaccinated 80 per cent of Chatham-Kent’s population over the age 60, “…which is epic.”

While, there is no immediate plans to vaccinate children, Colby was encouraged to hear Pfizer vaccine had been cleared for people ages 12 and up.

Colby expected a rollout plan to vaccinate children to begin in late June or early July.

John Howitt, the Director of Education of Lambton-Kent District School Board said vaccinated children could help with plans to return to in class learning in September.

“It would help enhance person to person learning, help bring back extra circular activities and reduce anxiety, overall,” he noted.