As summer winds down, Windsor-Essex tourism officials are hopeful momentum in the local sector will remain positive despite the federal government still requiring visitors and returning Canadians to use the ArriveCAN app when crossing the border.

“Without question, until that ArriveCAN app is discarded, we won't see the full return,” says Gordon Orr, the CEO of Tourism Windsor-Essex Pelee Island (TWEPI). “That will take a few years.”

“One thing that definitely will have to happen is the resumption of all business travel, convention travel, sport travel, and then a major still for us, is the ArriveCAN app,” he says.

Orr adds, “Americans aren't coming over in the numbers that they once did and that's because there are border restrictions still in place and as long as those border restrictions are in place, it will prevent people that aren't double vaccinated or haven’t downloaded the app and take the time to do it to cross the international borders.”

Officials have indicated some businesses in the tourism sector are seeing great rebounds, while others continue to struggle.

Orr noted hotel occupancy in Windsor-Essex increased 5.8 per cent in July compared to the same time in 2021.

“We did see the return of some American visitors, make no mistake. But we're not going to see the full return of them until we can relieve them of having to update that app to cross the international border,” says Orr. 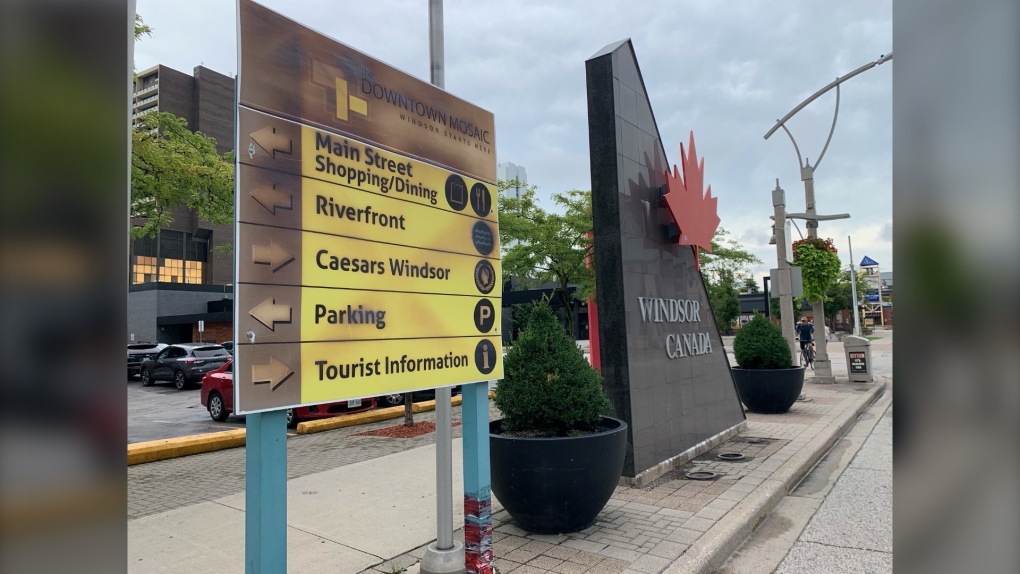 A sign in Windsor, Ont. is seen on August 29, 2022 advertising various tourism hotspots, such as the riverfront, Main Street and Caesars Windsor. (Chris Campbell/CTV News Windsor)In the meantime, some in the industry say international travellers are returning on a regular basis, noting the summer season remained consistently busy with a mix of American customers and locals.

“We’ve seen a big influx of our catering,” says the owner of The Grand Cantina, Rosemary Woods. “It means that people are getting together with their friends, doing events that they had to put on hold for a bit. So we've seen that really great.”

The Mexican restaurant on Drouillard Road was voted among the best in Windsor-Essex by TWEPI earlier this year, naming it “the best taco joint” in the region.

Woods explained there had been limited complaints from stateside visitors who had used the app to cross the border.

Woods continued, “Even from personal experience, it's pretty simple to go back and forth once you have all your ArriveCAN. Everyone kind of complains about it, but once you do it a couple times, it's pretty easy.”

“We have seen a lot of return customers in the United States, and not just not just in Michigan,” the general manager said, telling CTV News Windsor many guests are returning from Ohio, Massachusetts and Europe.

“I do always ask where people are coming in from and when they cross a border,” says Mason. “I asked what they're coming through the tunnel or over the bridge and how the process was and nobody has complained. Honestly, nobody has given me any indication that it was a hassle.”

Mason suggested it’s been a positive summer that has put high hope on the upcoming fall season.

“They knew what to do, they came over and I've heard no negative impact. Only from Canadians actually have I heard anything negative about the ArriveCAN app. The Americans are fine with it. From what I have experienced,” Mason says.

“We knew that this was going to be a reopening sort of season for us,” Orr says. “And we're happy to say that we've continued to reopen.”

He added, “We're seeing growth at our festivals and events. We've been there. We've had activations there with our visitor services, specialists, and they've seen bigger crowds than normal and the engagement and the activity has been higher with those folks, for people asking about tourism information. So there's great interest there's general interest.”