'I got no use for people that flee from the police': Farmer stuck with $2,400 repairs from Essex County car chase

WINDSOR, ONT. -- Peter Starzacher says he couldn’t believe what he was seeing when he went to his storage yard on County Road 42 Tuesday.

“I hope there is no serious shootings because they had some, the police officers they had some big guns,” he says.

Starzacher looked closer and saw that a car was wedged under the gate, “right up to the roof,” and the driver was hiding in the fenced lot.

“They secured the outside so the guy wouldn’t escape, they knew he was in there, they saw him go in, through the hole in the gate,” he says.

With the help of a K-9 unit, Essex County OPP discovered a suspect hiding under the tarp of one of the trailers in Starzacher’s lot.

“I’m glad they caught the guy and it’s good that he didn’t hurt somebody,” Starzacher says.

Police say the incident started on Highway 401 near Tilbury.

An officer was doing speed enforcement when they saw a vehicle travelling “at a high rate of speed.”

According to their news release, the OPP says, “in an attempt to evade police, the vehicle driver maneuvered the vehicle to drive the wrong way on Highway 401 travelling eastbound in the westbound lanes.”

When the driver got off the highway, police put down a “tire deflation device” which ultimately led the car to drive down onto Starzacher’s field and come to a stop under his gate. 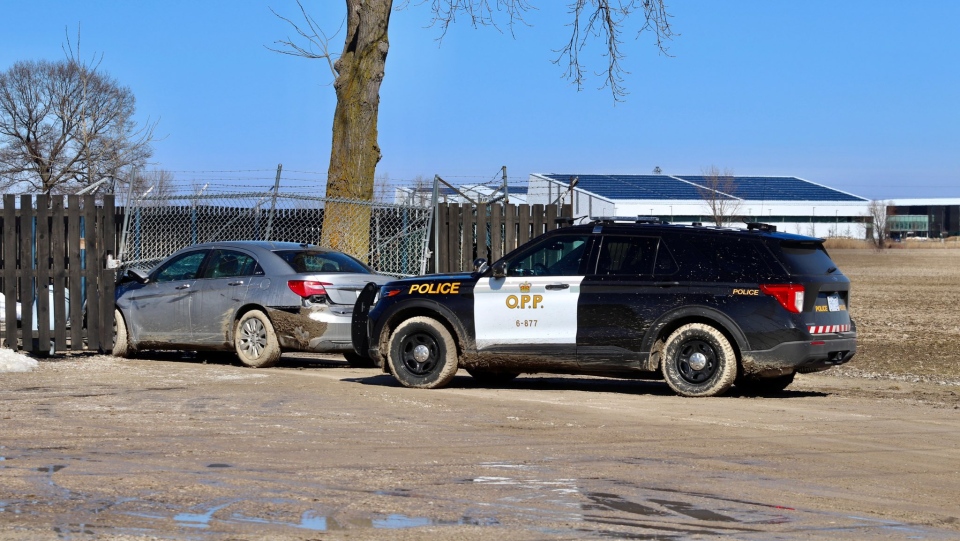 Wednesday, Starzacher got to work fixing his gate, which he estimates will be at least $2,400 to replace the gate and straighten the posts.

“It’s good that they get the guy and to make sure that I get the information so I can get reimbursed for the expenses of the fence,” he says.

Police have laid charges of mischief, dangerous driving and flight from police against Chad Coupe, 19, of London.