A yellow trailer top shaped like a giant rubber duck that went missing earlier this month along Highway 401 in Chatham-Kent has been found.

Affectionately known as “Teddy Ginsbird”, the duck trailer top been missing for nearly two weeks after coming loose along the highway during a strong storm.

“Well I had a good cry and then I danced around for a while and had another cry and then dance some more,” says owner Simon Shaw.

Shaw plans are in the works to have the trailer delivered to a Tilbury property for safekeeping until arrangements can be made for its retrieval.

“Apparently I passed these guys who were going on a hunting trip during the storm,” Shaw says. “And 10 minutes after I passed him they saw Teddy by the side of the road so they circled back and picked him up.” 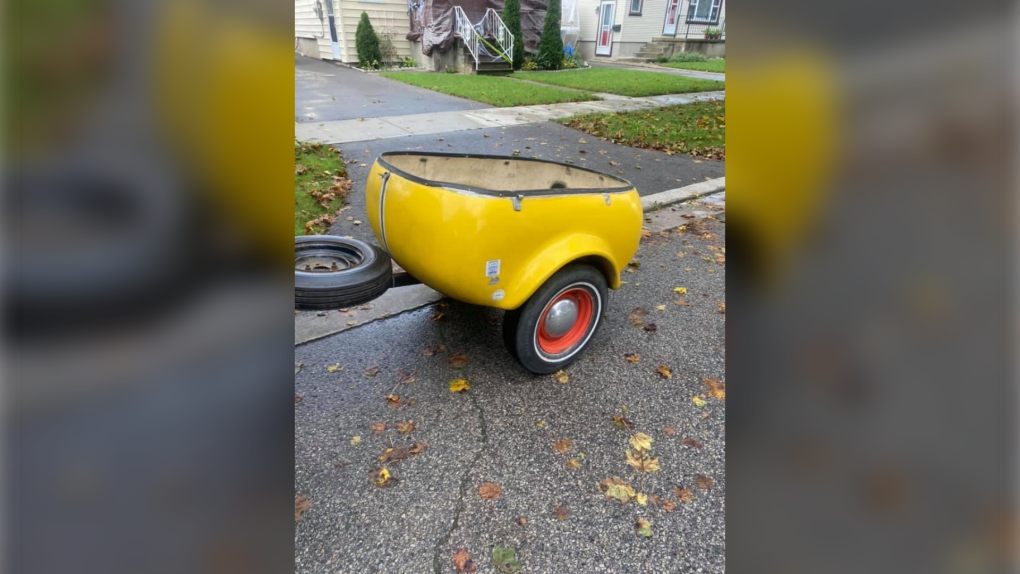 The top half of a Toronto man's trailer, a four foot rubber duck, went missing on Highway 401 in Chatham-Kent, Ont. (courtesy Simon Shaw/Instagram)

Shaw had plans to tour his duck trailer from Alaska to Chile after seeing the positive effect it has one anyone who saw it.

“It’s funny because I had so many people contact me about this just to say that the duck made their day and they are super concerned for where he is,” Shaw adds. “I think with all of the death and horror and terrible news that we’ve seen since COVID this actually really resonates with people."

“It all happens for a reason.”

Gyetvai says he had previously noticed the unique trailer pass by intact as he and his friend entered the highway ahead of a 10-day northern Ontario moose hunting trip.

“Just at the Tilbury cut off, we drove past it and you see just the giant duck head on the side of the road,” Gyetvai explains.

“We pass and my buddy is like, you know we’ve got to pick that up right? We figured it’s very unique, someone would probably want that back.”

Upon his return home Tuesday, Gyetvai learned the discovered duck was wanted and the focus of a two-week search, that gained attention near and far. “It was safe and sound in the back of my truck for a week or more!”

Gyetvai says he reached out to Shaw Tuesday, so arrangements for Teddy’s safe return could be made.

“Sent a message and said ‘hey I’ve got the duck head you’re looking for and here we are,’” he says.

“Just when you think you’ve seen it all,” says Cori-Anne Richardson, who is now housing the duck in her Tilbury home.

Richardson tells CTV News she spotted the duck in the back of the pickup truck Tuesday near Communications Road in Chatham-Kent. “I knew right away!”

“I had seen a few men in the truck,” she says. “I’m assuming they were all coming back from a hunting trip.”

Richardson says she reached out to Shaw online to let him know she saw his duck, but couldn’t flag the driver down.

“Just to let him know, I saw the duck. It’s in the area. I don’t know if you’ll get it back or not but it’s fairly intact,” she says.

Wednesday afternoon, Richardson picked up Teddy for Shaw to retrieve.

“He created this duck to bring and spread some positivity and we need a lot of that right now,” Richardson adds. “Really, we just want the duck to get back to Simon and he can repair and refurbish him a little bill and continue on with his positive efforts!”

Shaw remains thrilled, telling CTV News, “this isn’t actually a bad news story. This is a good news story, that the loss of this giant duck, as strange and unusual as it would be, has actually done exactly what the duck was supposed to do in the first place which is bring people together!”

Shaw notes he plans to revive his touring plans across north and South America, once repairs to Teddy have been made.

“It’s definitely back in the cards now,” Shaw adds. “I’m just beyond delighted!”