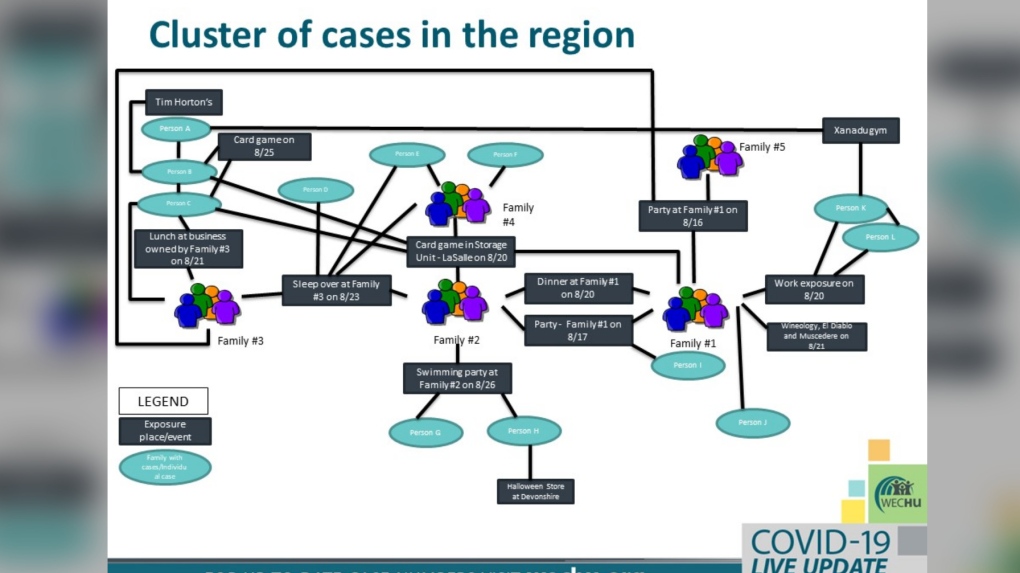 WINDSOR, ONT. -- At least 31 COVID-19 cases in the region are associated with a community cluster and the Windsor-Essex County Health Unit says it started with a family party.

Windsor-Essex medical officer of health Dr. Wajid Ahmed released details of the cluster on Wednesday. He says the earliest symptom onset was Aug. 20.

“It started off with family number one that had an event on Aug. 16,” says Ahmed. “But then what happened is they had a party, and then throughout that party then other cases were identified in that party."

He says there were other families and events involved, resulting in more cases.

“All of this started off with people who are not maintaining physical distancing in many of these social gatherings and then resulting in more spread in the community,” says Ahmed.

Ahmed is reminding the pubic that social bubbles should not exceed 10 people. In all other instances, physically distancing and the mask policy should be followed.

Ahmed says all the cases are still active, but there are no deaths associated with the cluster.

WECHU says 19 individuals were between the ages of 10 and 19. The health unit will not release the names of the people involved.

People who attended these parties or social gatherings are being asked to self-isolate or go get tested to prevent further spread.

The health unit says there were four new COVID-19 cases and one new death in the region on Wednesday. The total number of active cases is 93.