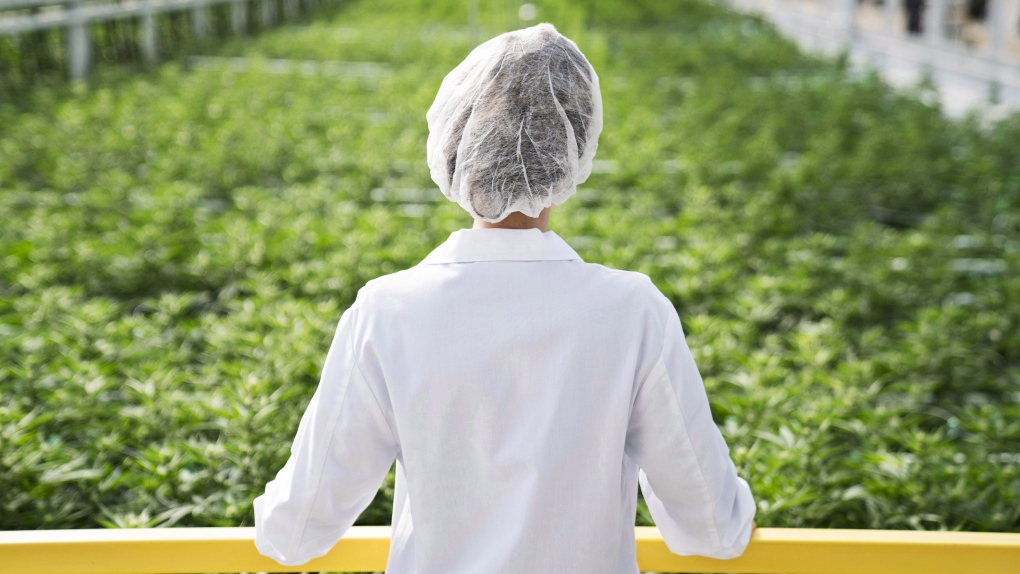 An Aphria worker looks out over a crop of marijuana in this undated handout image. (THE CANADIAN PRESS / Aphria)

The board of cannabis producer Aphria Inc. has formally rejected a hostile takeover bid by Green Growth Brands Inc., saying it "significantly undervalues" the company and would have "negative repercussions."

Shares of the Leamington, Ont.-based pot cultivator slipped as much as 10 per cent at $12.53 in morning trading on the Toronto Stock Exchange, but reached $13.14 in the early afternoon.

Aphria's board unanimously recommended the rejection after a committee reviewed the unsolicited offer, it said Wednesday.

The all-stock offer of 1.5714 shares of Green Growth Brands (GGB) for each Aphria share is "inadequate" and not in the interest of shareholders, the company's independent board chairman Irwin Simon said.

Negative repercussions include a delisting from the Toronto Stock Exchange and the New York Stock Exchange, he added. Ohio-based GGB has direct and indirect cannabis activities in the U.S., where pot is legal in certain states but remains illegal at the federal level, and a combined company would be prohibited from listing on these two exchanges, Aphria's board said in a directors' circular filed Wednesday.

"Regardless of their brazen attempts to suggest otherwise, GGB is asking Aphria shareholders to accept a substantial discount on their shares, as well as delisting from both the TSX and NYSE, resulting in a vast dilution of their ownership in Aphria," Simon said in a statement.

A spokeswoman for GGB says it will comment on Aphria's response in due course.

Late last month, Aphria said an independent committee of directors would review the bid and its shareholders should wait until the board made a formal recommendation.

GGB's takeover attempt came after Aphria faced allegations in December by short-sellers questioning the company's acquisitions in Colombia, Argentina and Jamaica. The cannabis company's shares plunged in the wake of the report by Quintessential Capital Management and Hindenburg Research. Aphria has denied the report, but established a special committee of independent directors to review the deals in question.

Aphria's board had previously said the unsolicited proposal "significantly undervalued" the company.

GGB's formal offer is due to expire on May 9.

Aphria's board said Wednesday the Ohio-based company's offer represents a 23-per-cent discount to its shareholders' investment, relative to the cannabis producer's volume-weighted share price over the 20 days before GGB's initial public proposal.

As well, financial adviser Scotiabank deemed the hostile bid "inadequate, from a financial point of view, to the Aphria shareholders, other than GGB and its affiliates," it said in the directors circular.

On Wednesday, Simon said Aphria is in a "better position than ever to create long-term value for our shareholders, following a positive second quarter and continued progress expanding our production capacity and global footprint."

GGB, however, is offering shares in an illiquid company with limited operating history, minimal assets and no track record in the cannabis industry, he said.

"GGB clearly timed their offer to exploit recent lows for Aphria and cannabis stocks overall, with the goal of transferring value to the insiders who control GGB at the expense of Aphria shareholders," he said.