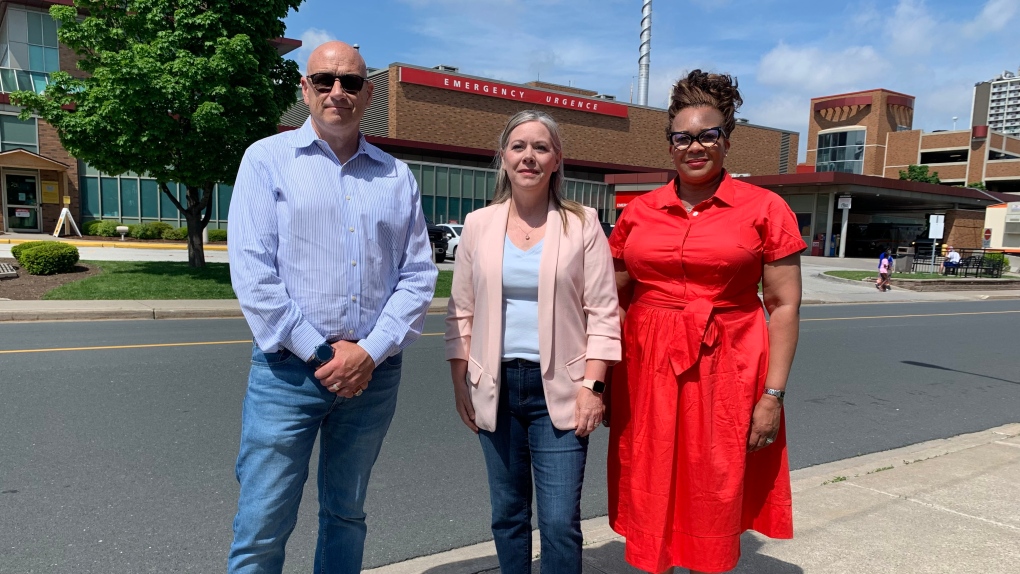 A trio of New Democrat candidates in Windsor-Essex reiterated their support for a new acute care hospital plan in the region, while also promising to improve healthcare for local families on Friday.

“Families in in Windsor-Essex deserve a health care system that actually meets their needs. They shouldn’t have to face long emergency wait times or contend with hallway medicine because there aren’t enough beds or staff available,” said Gretzky. “An NDP government would bring in universal mental health coverage and undo years of cuts to hospital funding. We would repeal Ford’s low wage policies so that Windsor can keep the nurses we have and attract more, instead of losing them to hospitals across the border.”

Gretzky said the NDP would immediately repeal the PC Party’s Bill 124, which freezes wage increases to one per cent annually, a measure she said has led to many leaving the profession. The party also plans to hire 30,000 additional nurses across the province.

Grey-Hall committed to prioritizing the new regional hospital and make sure it is built on schedule.

“We’re going to make sure the new regional hospital gets built quickly and that we have the right mix of services there for families,” said Grey-Hall. “The new regional hospital is critical to the future of health care here in Windsor, and we’re going do what it takes to make sure it’s built on schedule. We’re going to provide enough nurses and health care workers so that we don’t have long wait times and hallway medicine, like we had under the Liberals and Conservatives.”

Gretzky said the timeline for building the hospital is too long, with a scheduled completion for 2031.

She says the New Democrats can bring it faster, while also ensuring 24-hour emergency services are retained at the Ouellette Campus.

“We worked across all party lines, and then Doug Ford came in who then started politicizing the hospital, which only slows the process down,” said Gretzky. “So we would take that out of the equation and we would ensure that hospital is able to move forward much faster than it is right now.”

The trio also pledged to improve emergency services to shorten wait times, and clear out the surgery backlog that existed prior to the pandemic and only worsened over the past two years.

“We’ll make sure the regional hospital offers the services Essex families need,” said LeClair. “Over the years, we’ve seen cuts to critical services, like advanced gastric and cardiac surgeries, and some cancer treatments.”

“No one here should have to drive to London, Toronto or Detroit to get the health care they need. With an NDP government, communities and families across Essex will able to get the care they need right here at home.”