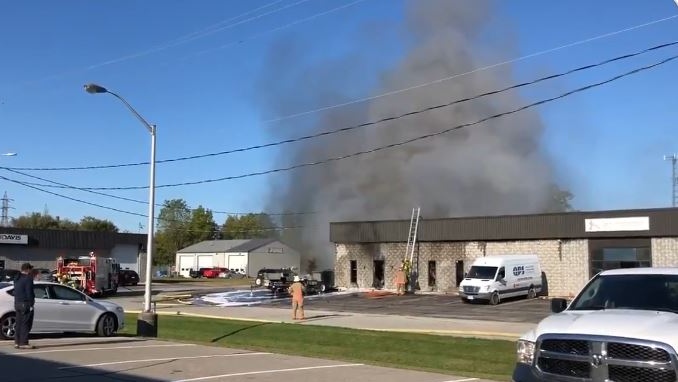 Crews were called to the structure fire on Sass Road in Chatham, Ont., on Wednesday, Oct. 9, 2019. (Courtesy Chatham-Kent fire)

CHATHAM -- Two men were taken to hospital after a commercial building fire in Chatham.

Chatham-Kent firefighters were called to the structure fire at the back of QPS Mechanicals at 7 Hart Street around 9:30 a.m. on Wednesday.

Officials say the fire spread quickly through the building and two employees were assisted.

The men, ages 61 and 44, were taken to hospital to be treated for smoke inhalation.

By the time the fire was out, officials say there was a partial collapse of the building.

"Our teams were on scene very quickly to attack this rapidly developing fire and they prevented the spread to other businesses," said Operations Chief Chris Case.

No word on the cause of the fire.

The Office of the Ontario Fire Marshal and the Ministry of Labour have been informed.