Ten people have been charged with 111 offences following a multi-jurisdiction investigation into the importation and distribution of illegal guns into Ontario from the United States.

Ontario Provincial Police released a link of photos of the guns and drugs seized.

“Operations like this reduce violent crime in cooperation with the community,” says Windsor police Deputy Chief Vince Power in a news release. “All members of this integrated team deserve recognition for their hard work and dedication to duty.”

The joint forces initiated an investigation into the criminal activities involving several residents of Windsor and Essex County, specifically the importation and sale of illegal firearms between Michigan and Ontario.

As a result, police have charged 10 people with 111 offences including charges relating to the Criminal Code of Canada, the Controlled Drug and Substances Act and proceeds of crime.

One person remains at large in Canada and is believed to be in either Windsor or the Greater Toronto area. A second person, a United States citizen residing in Michigan, is also wanted.

Several of the accused persons have already appeared at Ontario Courts of Justice at various times and dates. 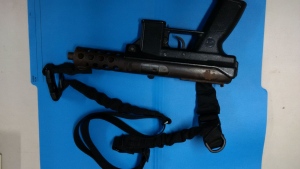