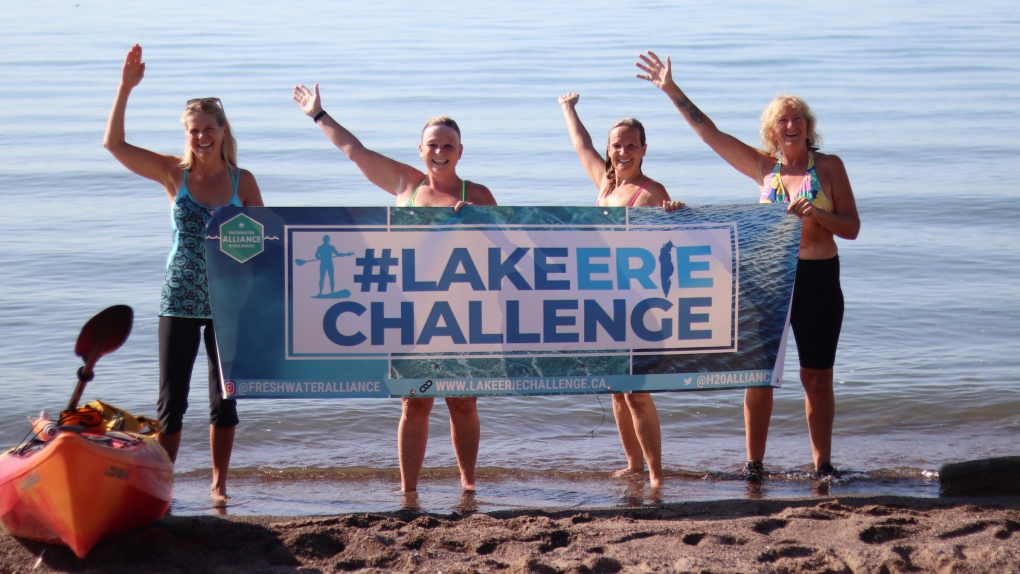 WINDSOR, ONT. -- Working in teams, seven athletes swam and paddled 50 kilometres from Amherstburg to Leamington in under six hours for the Lake Erie Challenge.

Dennis Higgs, Mairi MacGregor and Jennifer Agnew of Team Swim were the first in the water Saturday , starting their day at sunrise at Colchester Beach.

Higgs, a biology professor at the University of Windsor, set a new personal best, swimming 14 km to Cedar Beach, further than any of his previous swims.

“My experience on the water today was exhilarating,” says Higgs. “The most uplifting part was seeing how nice the shoreline is. I could watch the birds fly by.”

Higgs’ support kayaker, Kirsten Poling adds “The last hour was tough, Dennis kept asking if we were there yet, he was ready to be done.”

Some of the students working with Higgs were there to cheer on their professor at the finish line, surprising him as he got out of the water.

Stand-up paddle-boarders Rachelle Cardinal and Frank Torres completed a distance of 20 km from the mouth of the Detroit River to Colchester Beach, while Don Barrie and Rose Sirois kayaked from Cedar Beach to Seacliff Beach in Leamington.

“I was surprised to not see any other paddlers out” says Barrie. “Lake Erie really is stunning, and by the quiet dip of a paddle is a great way to experience it.”

The Lake Erie Challenge is hosted annually in support of the Lake Erie Guardians and the Canadian Freshwater Alliance.