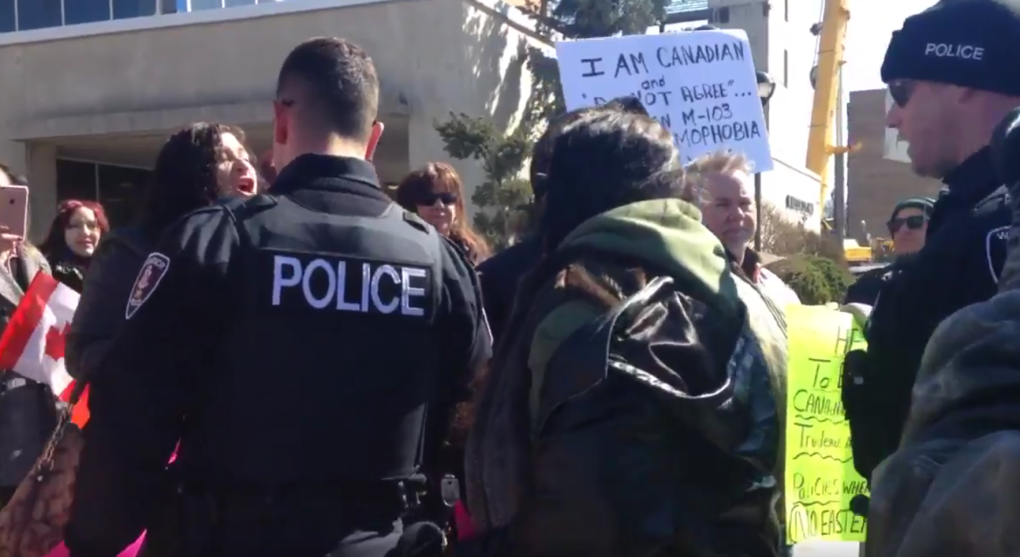 A rally by a group calling itself the Canadian Coalition of Concerned Citizens at Windsor’s City Hall Square got heated Saturday afternoon. Police stepped in to help de-escalate tensions after a counterprotest emerged from people who denounced Islamophobia.

Concerned Citizens groups are holding similar rallies in cities across Canada today. The members say they are against, among other things, Sharia Law, the code of religious and moral conduct for Muslims.

The group’s members are also opposed to Motion 103. At today's rally they voiced their displeasure over what they believe to be potential restrictions on free speech arising from the motion. Their view was disputed in heated exchanges by other protesters who consider their stance Islamophobic.

Motion 103 is a non-binding motion that calls on the government to condemn Islamophobia and study the best ways to quell an “increasing public climate of hate and fear.” It was tabled by Liberal MP Iqra Khalid last December. In mid-February, Federal Liberals supported the backbencher’s motion.

The motion has been the subject of rumours on right-wing websites implying that Motion 103 is a step toward Sharia Law in Canada and that it would repress free speech by criminalizing criticism of Islam. Motion 103 is not a bill so it cannot become law or make any changes to Canada’s existing laws that cover freedom of speech.

The counter-protesters at today's Windsor rally are not to be confused with the "Fight Islamophobia" rally that had been scheduled to take place this weekend, but was cancelled.