Every day since the owner of Thanasi's Olympus Greek Restaurant in Windsor, Ont. announced he would be retiring, Nick Pontikis says the place has been packed like it would be on New Year's Eve.

"The outpouring of support and love from the community has been just overwhelming. Everyday, it's a cry-fest at Thanasi's,” he said.

But after 41 years in business, Pontikis and his staff are saying farewell to Windsor as Thanasi's closes its doors for the very last time on Saturday.

Along with his wife, Pontikis opened Olympus Greek BBQ in Forest Glade in 1981.

"At the time, there were no smartphones. There were no computers. Windows 95 was still 14 years away," he said.

The restaurant would relocate to downtown Windsor in 1983. Five years later, Pontikis purchased the building where Thanasi's has operated for more than three decades, on the corner of Tecumseh Road East and Pierre Avenue.

"We introduced Greek food to Windsor," said Pontikis. "Prior to that, there were just a couple of souvlaki and gyro places. But that's basically Greek fast food."

He continued, "We introduced flaming cheese to Windsor. The 'Opa!' — tzatziki sauce, moussaka, pastitsio. I know these are Greek to most people. But when I mention these dishes, people start drooling."

For the past six weeks, the restaurant has put out a box at the front where customers can write well-wishes to Pontikis and his staff. 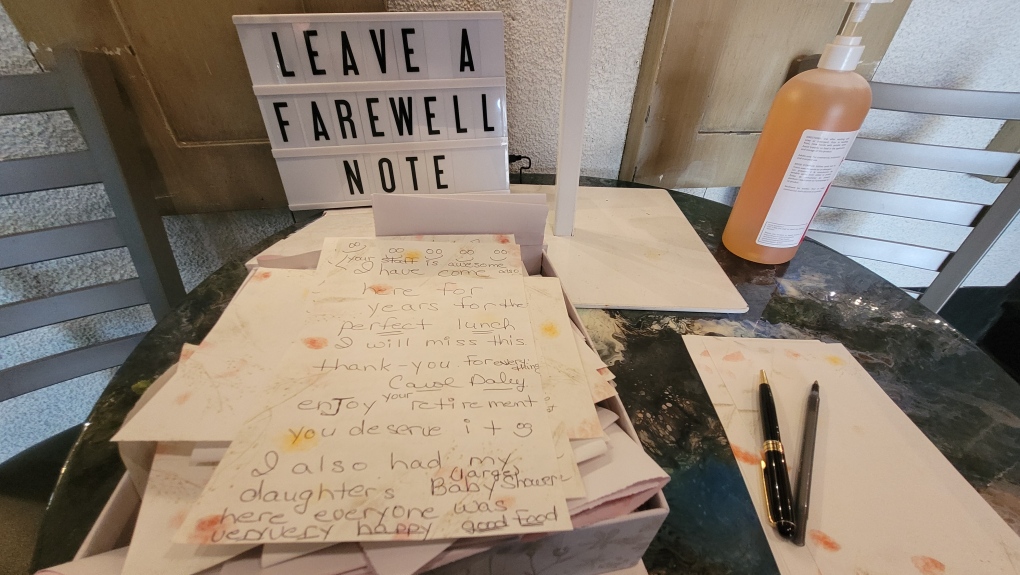 Fans of Thanasi's have been leaving 'farewell notes' for the staff ever since Pontikis announced the restaurant would be closing its doors. (Sanjay Maru/CTV News Windsor)

When asked to read out some of the notes to CTV News, Pontikis said it would be too difficult to do so without crying.

But one of the most challenging moments of getting through the restaurant's final dinner service on Saturday, Pontikis said, is seeing the faces of customers saying one last goodbye.

Fighting back tears, Pontikis was also sure to credit his staff for their years of loyalty.

She started coming to Thanasi's with her parents when she was around 10 years old.

As the years have went by, she's continued coming to the restaurant ⁠— but with her own children.@CTVWindsor pic.twitter.com/8zbTOA0eoI

"I've been running the kitchen with some amazing staff. Most of my staff have been with me almost since 1981. I can't get rid of them,” he said, with a laugh.

When asked what he plans to do during retirement, the 65-year-old pointed to a photo from 2018 up on the walls of the restaurant.

In it, Pontikis has hit feet kicked up in front of his beachside family home in Athens.

During that trip four years ago, his mind was still focused on the restaurant. But after Saturday, Pontikis said, he'll be much more relaxed in the days ahead.

"I'm going to spend more time in Greece and travel a bit — and even take my golf clubs out of storage," he said. "It'll just be nice not having to worry about the restaurant."