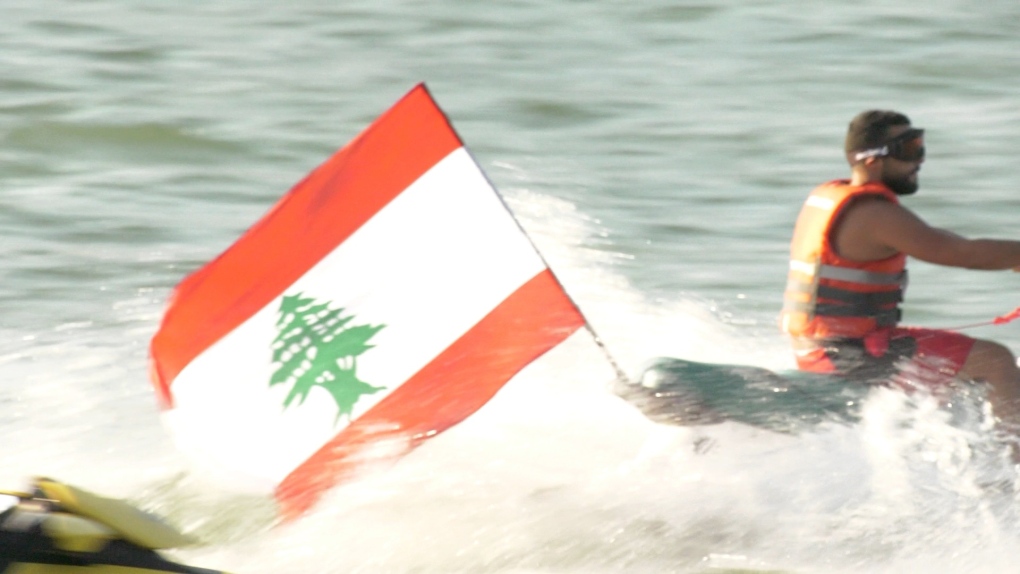 A man with a flag of Lebanon takes part in a vigil held in Windsor along the Detroit River on Friday, Aug. 7, 2020 to mourn the loss of life and devastation in the aftermath of a shock explosion in Beirut, Lebanon on Tuesday. (Ricardo Veneza / CTV Windsor)

WINDSOR, ONT. -- The Lebanese community in Windsor-Essex is banding together to help send money to the rebuilding effort in Beirut following a devastating explosion in the Lebanese capital this week.

On a sunny Friday evening near the Knights of Columbus Peace Monument along the Windsor waterfront, a few dozen people gathered for a vigil to mourn the loss of life following Tuesday’s shock blast.

“It hurts more deep in my heart,” said Hussein Osman, in an impassioned cry during the vigil.Osman calls Canada home but, his heart will never forget his native Lebanon.

“We build you, we build you again,” said Osman, vowing to help rebuild his beloved country.

Attendees wrapped themselves in the Lebanese flag while a group on jet skis flew the red and white banner with its Lebanese cedar on the Detroit River in a salute to the vigil.

Nour Hachem, the president and founder of Build A Dream in Windsor, also addressed the vigil and was moved to tears as she highlighted the thousands of lives impacted by Tuesday’s devastation.

“It hits home and it’s really hard to put into words how heartbroken and devastating it is and how hard it is for everyone and my heart goes out to people that have lost their families or are seeing their family lose their home,” said Hachem.

Hachem was born in Lebanon and moved to Canada when she was just a year old.

Tuesday proved to be a sleepless night for Hachem who is thankful her own family in Lebanon is safe.

By Wednesday morning, Hachem felt compelled to act and began reaching out to businesses and partners to help those halfway across the world.

“Lebanon needs our help right now,” said Hachem. “Not only are they impacted by COVID-19 but, civil unrest and now with this explosion.”

Hachem’s outreach has spawned a new ‘Windsor-Essex Helping Lebanon Group’ with over 500 members and a plan to donate.

This Wednesday, participating businesses will donate proceeds to the Red Cross to help with rebuilding efforts in Beirut.

Hachem said buying local will help in a global way.

“The beautiful thing about Windsor is that we come together in a time of need,” said Hachem. “It’s beautiful to see so many locally-owned businesses that are Lebanese-owned, Canadian-owned willing to lend their help.”

Hachem says there are already a dozen businesses that are prepared to help and hopes to confirm matching donations from a local unnamed leader.

The shock blast is blamed for the deaths of at least 149 people and injuries of more than 5,000. Reports indicate a fire ignited more than 2,700 tons of ammonium nitrate to cause the explosion.